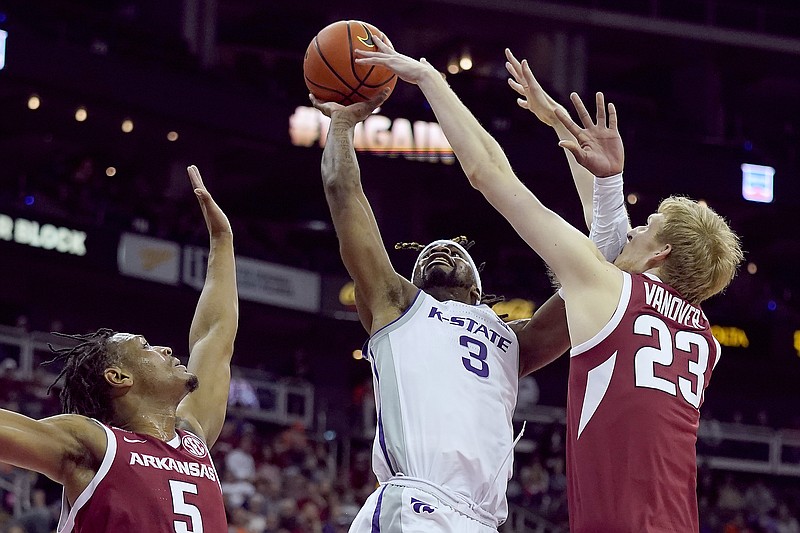 KANSAS CITY, Mo. — Facing its best competition of the early season Monday, No. 13 Arkansas turned in its best defensive performance yet against Kansas State.

The Wildcats were able to find some offensive success in the second half of the nightcap on Day 1 at the Hall of Fame Classic, but the cushion the Razorbacks built on the backs of their first-half defense was more than enough to claim a 72-64 win and improve to 4-0.

Arkansas moves on to face Cincinnati in the event's championship game at approximately 8:30 p.m. on Tuesday. The Bearcats knocked off No. 14 Illinois 71-51 earlier Monday.

The Razorbacks, according to KenPom data, recorded their top defensive efficiency rating of the season against Kansas State (87.6) and held the Wildcats to their worst showing in three games beyond the three-point line. K-State entered Monday averaging nine made threes per game, but connected on only 3 of 22 attempts against Arkansas.

It was a vast improvement considering the Razorbacks allowed 43 threes combined to Mercer, Gardner-Webb and Northern Iowa.

“I thought that first half was about as good a 20 minutes as we’ve played since I’ve been here,” Arkansas coach Eric Musselman said. “I thought our defense in the first half was phenomenal. And then K-State started driving the ball and we played a little bit smaller lineup, so we didn’t really have a lot of shot blocking in there all the time.

“Again, give them credit for being aggressive as well. But we had to do a really good job on (Wildcats guard Nijel) Pack, and I thought we did a great job taking away his three, for sure.”

Arkansas’ defensive play prior to halftime was suffocating at times and negated opportunity for Kansas State to fall into a rhythm on offense. The Razorbacks led by as many as 18 points in the first half and held the Wildcats to .686 points per possession before halftime.

In building a 42-24 lead at the break, Arkansas outscored Kansas State 9-4 in points off turnovers and 7-2 in transition. The scrappy, tough play of wing Au’Diese Toney sparked a 10-5 edge in second-chance points.

But team defense and the most impressive stretch of it Arkansas has showcased through four games had the Razorbacks on the verge of running the Wildcats out of T-Mobile Center.

There were a number of noteworthy sequences by Arkansas on the defensive end. In one, sophomore forward Jaylin Williams swatted a Kansas State layup attempt off the glass and ignited a fast-break opportunity for JD Notae and Toney.

Notae fancily found Toney with a behind-the-back pass for a layup, plus the foul. Notae later jumped a passing lane along the sideline opposite the Razorbacks’ bench and while in the air and falling out of bounds threw the ball off a Wildcats player, gifting Arkansas possession.

Stanley Umude, who added 10 points and 4 rebounds in his third consecutive game off the bench, added 1 of his 2 steals on a Kansas State baseline out of bounds play. After tipping the pass to himself near midcourt, Umude hammered home a dunk on the other end.

“Well, credit to them,” K-State coach Bruce Weber said. “If you've watched their games, they've gotten behind to almost every team, even their exhibition games. East Central (Okla.) had them by 14 even into the second half.

“But they came out and attacked us. They were in attack mode. Their pressure was, you know, really good. It disrupted us.”

In that first half, Kansas State shot 7 of 27 and misfired on all 10 of its three-point tries. It also turned the ball over eight times.

Pack, the Wildcats’ leading scorer entering the game, finished with 14 points on 5 of 12 shooting and had 5 turnovers. He was 1 of 5 from the floor and had 2 points and 3 turnovers prior to halftime.

Following last Wednesday’s win over Northern Iowa, Musselman vowed to get the Razorbacks’ perimeter defense in order. Monday was a terrific step in the right direction.

Kansas State’s three made three-pointers are the fewest allowed by Arkansas since Ole Miss made 1 of 16 attempts on Jan. 27 in a 74-59 Razorbacks win in Bud Walton Arena.

“I think we’ve solved we can guard the three, but now we’ve got to guard the dribble drive, too,” Musselman said. “We played a Big 12 team and we led for 39:18. That’s really hard to do. We led from start to finish.

“Obviously in the second half they outplayed us, but we come away with an eight-point win. Now we’ve got to get ready for a good Cincinnati team.”