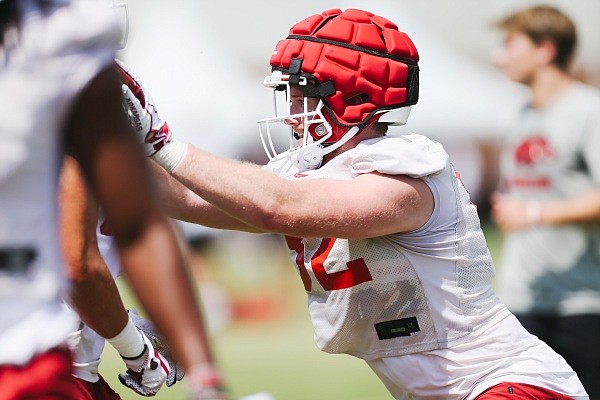 Arkansas tight end Hudson Henry (82) goes through a drill on Saturday, August 6, 2022, during a preseason football practice in Fayetteville.

FAYETTEVILLE — Arkansas coach Sam Pittman said Friday after the Razorbacks’ first workout of the preseason that tight end Hudson Henry did not finish the practice.

Henry, entering his redshirt junior season at Arkansas, was transparent Sunday as to why. He said he suffers from asthma and was having a difficult time breathing in the humid August heat.

“That first day I was struggling a lot with some breathing problems,” Henry said. “That was kind of a challenge.”

In the Razorbacks’ two practices since, he has had no issues. Henry said he was able to finish the second and third practices and contribute.

It was the kind of response tight ends coach Dowell Loggains expected. A quarterback at Arkansas from 2000-04, Loggains is in his second season as an assistant under Pittman.

More from WholeHogSports: Observations from Day 3 of Arkansas' fall camp

He spent 2015-20 as an offensive coordinator with three NFL franchises.

“(I saw the) same response I'd expect from any of our tight ends, and that's to come in and do your job,” Loggains said. “Football is hard, and everything is earned. We had an issue physically with him that he has overcome and done a nice job. I can honestly tell you this, and this isn't coach talk or me trying to sit up here and trying to make something ... This kid honestly cares about the team more than himself.

“That doesn't happen much in this world in this time in the age of instant gratification on Twitter and Instagram and Facebook and all that stuff. He legitimately wants to do what is best for the team, be a good teammate and serve in any role he can find that helps the football team."

The former No. 1 tight end in his recruiting class, Henry to this point has not had the career many, including himself, thought he would have. He has dealt with adversity on numerous occasions and battled various injuries.

In 10 games last season, Henry caught four passes for 27 yards. He has 23 receptions and one touchdown — in 2020 at Mississippi State — as a Razorback.

Asked for any objectives or goals for his fourth fall camp, Henry noted he is keeping things simple.

More from WholeHogSports: Loggains, tight ends talk to the media after Day 3 | Sights and sounds from Sunday's football practice

“I’m not originally from here, but my whole family’s from here, so I love this state. I love the Razorbacks. I’ve loved them my whole life. I want to do whatever I can to help us win a championship.”

Loggains described Henry as the ultimate teammate. The tight end is concerned with doing what is right by the team and improving himself.

“I’ve told him multiple times you can only control what you can control and everything is going to be earned in our room,” Loggains said. “If you want more playing time, you have to earn it. We've got a good group in there that are all competing. Hudson is doing a nice job.

“He has the advantage of being intelligent. He comes from a great lineage and DNA in his family of good football players.

"Now he has to come do it on his own and make it, which he's doing a good job of."