'Ridiculous' turnovers a concern for Musselman 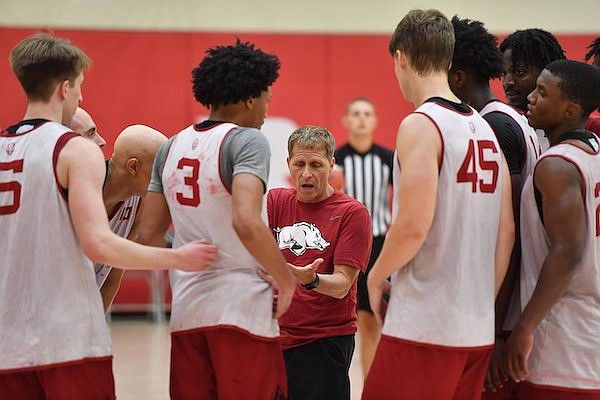 Arkansas coach Eric Musselman speaks to his team Wednesday, July 27, 2022, during practice in the Eddie Sutton Men's Basketball Practice Gym on the university campus in Fayetteville.

On Aug. 3, before Arkansas departed for Europe, Eric Musselman said everyone who watched his team’s four exhibitions would be shocked by the number of traveling calls against the Razorbacks early on.

Musselman, the coach who holds plenty of international basketball experience, explained that American players with a quick first step have been known to be whistled at a high rate for walking. It again proved to be true during Arkansas’ games in Spain and Italy, which concluded Monday with a 70-59 victory over Denmark's Bakken Bears.

Traveling violations, however, seemed to only be a small part of the Razorbacks’ turnover troubles overseas. In its exhibition finale, Arkansas committed a tour-high 30 turnovers.

Bakken turned the turnovers into 25 points.

“The turnovers are ridiculous,” Musselman said. “Words can’t describe how concerned I am about our turnovers. Our three-point shooting has got to improve. I didn’t think it could match last year, but it kind of is.

“So in a short amount of time, meaning September and October, we have some guys that really have to work on taking care of the ball and then we’ve got to improve perimeter shooting.”

The Razorbacks unofficially finished with 86 turnovers in four games. They committed 20-plus turnovers in three games.

Ball security has been a hallmark of Musselman-led college teams. Four times in his first seven seasons as a head coach his teams have finished inside the top 25 nationally in terms of offensive turnover percentage, according to KenPom data.

The Razorbacks’ turnover percentage in Europe isn’t known, but everyone on the coaching staff and roster understands decision making and ball handling must improve leaps and bounds in the coming months.

“I’m really happy with how we played both sides of the ball other than the turnovers,” Musselman said. “And I think the turnovers are something that when you play high school basketball, turnovers are accepted because your talent can take over. You can’t turn over the ball in the SEC and win.

“There’s too many close games. Now we have concrete evidence to show guys what we have to do better.”

After previous games, Musselman said a number of turnovers came on lob attempts by freshman guards. In other instances, players stepped on the sidelines and baselines, and made contested entry passes to interior players.

Inbounding the ball was another area of concern.

“What we found is we are having all these turnovers in the middle of the field," Musselman said. "I talked to our team about how hard it is sometimes for wide receivers when they do a down-and-in (route) compared to a down-and-out. When you talk to wide receivers, a lot of guys like to catch balls on the sideline rather than up the middle.

“We're trying to give our big guys passes while they are running at full speed at the free-throw line. That puts our big men in a difficult situation no different than if you have a guy going down and in across the field and there's four defensive backs or linebackers waiting to clock them.

Ricky Council, the transfer from Wichita State who scored 10 points Monday, said the miscues are an easy fix. Emphasizing making the simple play can eliminate a number of mistakes.

“I would say the majority were lobs,” Council said. “Trying to hit somebody for a lob dunk and either it was dropped or it was tipped or didn’t even make it there at all. I know I probably threw a lob where it didn't make it maybe twice.

“That was probably two of my turnovers. That's something we've got to clean up.”

Nick Smith and Davonte Davis unofficially led the team with 12 turnovers on the trip. Davis had seven Monday.

Jordan Walsh and Council each had nine turnovers Monday, and Anthony Black and Trevon Brazile each recorded eight. In all, eight players had at least six turnovers.

“We beat a really good team, a really experienced team with 30 turnovers,” Musselman said. “That's what happens when you have a lot of new guys. You're going to turn the ball over a lot.

“Obviously our goal is nine, so that has to drastically, drastically improve. Now we are able to go back and work on it."