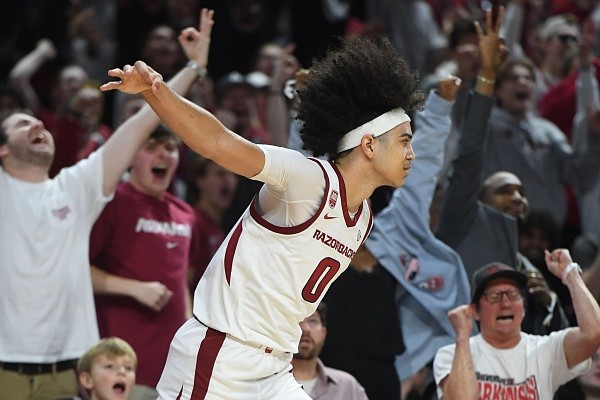 Arkansas' Anthony Black reacts to making a three-pointer in the second half of the Razorbacks' 65-58 victory over UNC-Greensboro on Dec. 6, 2022, at Bud Walton Arena in Fayetteville.

Prior to arriving on campus this summer, the guard heard and read various opinions about a particular aspect of fellow freshman Anthony Black’s game. What struck him and stayed with him in the months since were remarks that Black is an ineffective jump shooter.

Smith is ready for those conversations to die down, especially now that Black is off to a solid start beyond the arc with the Razorbacks.

“You know, he works on his jump shot every single day,” Smith said. “That's one thing about AB, he's always going to find ways to get better, either watching film or working on his jump shot. I've known AB since he was young.

Black, a 6-7 guard, was No. 9 Arkansas’ primary source of perimeter offense Tuesday during its 65-58 victory over UNC-Greensboro. The Razorbacks struggled mightily on the offensive end in the first half, but found a groove after halftime behind electric play from Smith as well as Black’s scoring boost.

Arkansas hit 3 of 18 three-point attempts. Black finished 2 of 4, and both buckets were timely.

His first make — in the right corner — came less than five minutes into the second half and provided the Razorbacks a 44-43 lead, their first since 6-5 with 14:57 left in the first half. Then, with 3:09 to play, Black stepped into and buried a right-wing three that put Arkansas ahead 54-49.

“I feel like that one three he made was the game,” Smith said. “When I threw the skip pass to Ricky (Council) then he (drove) and kicked and AB made the three, that was real big for us.”

With his 2-of-4 outing from deep against the Spartans, Black enters Saturday’s noon game against Oklahoma at BOK Center in Tulsa on something of a tear. He has made 5 of 9 beyond the arc since Nov. 28.

For fourth-year Arkansas coach Eric Musselman, there is a simple explanation for Black’s perimeter success.

“AB is really working on it,” he said. “On off hours, you see him in the gym. I think he’s shooting the ball with good confidence. I think the biggest thing is his feet are set when he’s taking those threes, and we need him to keep the defense honest.

More from WholeHogSports: More coverage of Arkansas' 65-58 win over the Spartans on Tuesday

“I think (his three-point percentage) continues to rise because the quality of the shot that AB is taking is a high-quality shot.”

Both of his three-point makes Tuesday came on the right side of the floor, where he is 6 of 8 this season, according to CBB Analytics. Black is 5 of 7 from deep on the right wing.

He is also 5 of 11 beyond the arc on the left side of the floor.

CBB Analytics data also reads that the guard has had the greatest impact on Arkansas’ three-point shooting so far. With Black on the floor, the Razorbacks have shot 33.3%, up from 19.2% in his 63 minutes on the bench.

“He’s not forcing it,” Musselman said. “He’s getting his feet set and he’s getting it on swing passes or when his man over-helps.”