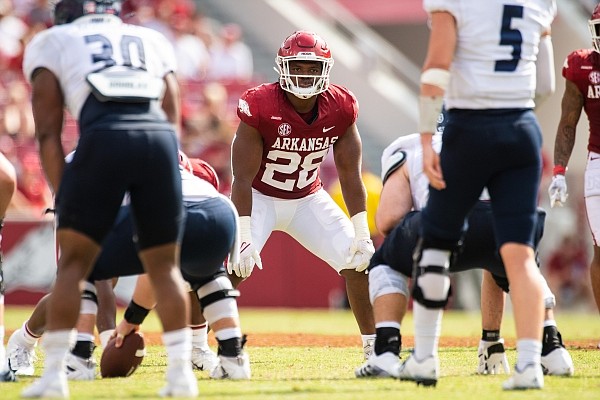 Arkansas linebacker Andrew Parker prepares for a play during the Razorbacks' season opener against Rice on Sept. 4, 2021, in Fayetteville.

Parker, who completed his redshirt junior season in 2021, made the announcement in a post to his Twitter account on Thursday. He has two seasons of eligibility remaining.

“I want to thank Coach Chad Morris, Coach John Chavis, and Coach Ron Cooper for bringing me in to be a Hog,” Parker wrote. “I would also like to thank Coach (Sam) Pittman and his staff for the support and continued development throughout my time here.

“To my teammates, I am beyond blessed to have met every one of you and I will always cherish the memories that we’ve made. Thank you hog nation for all of the support through thick and thin that you have shared, I am appreciative of it all. This decision has been one of the hardest I’ve had to make in my young life.”

In three seasons on the field, Parker recorded 24 tackles, including a career-best 12 in Arkansas’ 2020 season. He finished with four stops in the Razorbacks’ season-ending loss to No. 1 Alabama on Dec. 12, 2020, and also had four against Rice to begin the 2021 season.

A native of New Orleans and a former 3-star prospect, he signed with Arkansas over scholarship offers from programs such as Texas A&M, Texas and TCU.