Razorback report: Utes do damage from 3 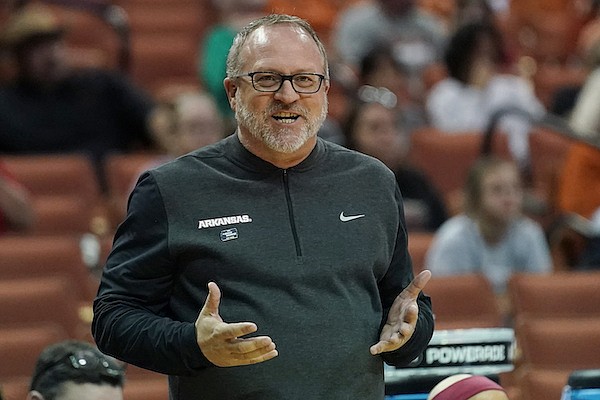 Arkansas head coach Mike Neighbors reacts to a play during the first half of a college basketball game against Utah in the first round of the NCAA women's tournament, Friday, March 18, 2022, in Austin, Texas. (AP Photo/Eric Gay)

AUSTIN, Texas — The University of Arkansas knew Utah could shoot from outside. The Utes showed how good they were Friday afternoon in the Frank Erwin Center.

Utah made 15 of 31 (48%) from beyond the three-point arc, led by six from Kennady McQueen during its 92-69 victory over Arkansas. But she had plenty of help as six different Utes made a three.

McQueen made 6 of 9 from deep, while Gianna Kneepkens went 3 for 3, Brynna Maxwell and Dasia Young each hit two, while Isabel Palmer and Ines Vierira hit one apiece.

Arkansas senior Amber Ramirez, a good shooter in her own right, said the Razorbacks struggled to find an answer to slow the Utes.

“Yeah, they could shoot — 1 through 4 they were shooting,” Ramirez said. “Even their subs they brought in, they were all making shots. Like she said, they made you pay. Regardless of what we tried to do, they’re going to make you pay for a mistake that we made.

Arkansas guard Makayla Daniels made a comparison with Ramirez.

The Utes had six players play 20 or more minutes and another 19-plus minutes.

“If you’re not reliant on a shooter or two shooters, if you have a whole group out there that can shoot, then it’s pretty tough to defend,” Roberts said. “I enjoy it. It’s fun. The kids — especially at this point in the season, they know what a great shot is, and I think players enjoy playing in that kind of system where anyone can shoot it at any time if it’s a great shot for our team.”

The junior guard finished with 18 points and a team-high seven rebounds. She needed only four points to reach the plateau.

Arkansas freshman Jersey Wofenbarger was held out in the second half after falling and hitting her head in the first half.

The 6-5 McDonald’s All-American from Fort Smith Northside fell and hit the back of her head. She was helped to the bench, but came back in the game a few minutes later.

Neighbors didn’t have a specific report on her following the game, but said she was held out likely as a precautionary measure

“If you were in there you heard the thud,” Neighbors said. “She is definitely a tough kid and played in the first half. But after some further evaluation, I don’t know what it is, but it was not in her best interest in the long term or the short term to play. … you look at that line and you know that Jersey was helping us.”

Wolfenbarger didn’t score but grabbed four rebounds and blocked a shot in 12 minutes.

Junior Dasia Young may be a native Arkansan, but she did her part to take down the Razorbacks.

The Jonesboro native scored 7 points, grabbed 7 rebounds and dished out 4 assists in 26 minutes from off the bench for the Utes. Young, a standout at Nettleton, played two seasons at Tennessee-Martin before transferring to Utah this year.

The 5-11 junior has played in all but one game for Utah this season and made 11 starts. Young and Razorback redshirt freshman Elauna Eaton were also teammates for one season at Nettleton.

The Razorbacks made consecutive NCAA Tournament appearances for the first time since 2002-03.

Arkansas also lost in the first round for fourth time in 13 appearances.