'A lot to play for': Hogs aware of weekend ahead 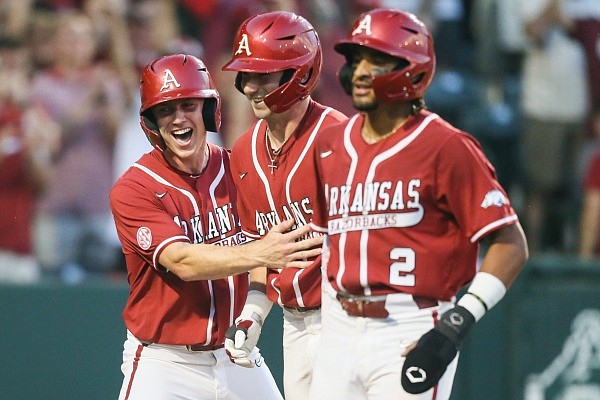 Arkansas Cayden Wallace (7), outfielder Jace Bohrofen (8) and nfielder Jalen Battles (2) react following a score, Saturday, May 14, 2022 during the fourth inning of a baseball game at Baum-Walker Stadium in Fayetteville. Check out nwaonline.com/220515Daily/ and nwadg.com/photos for a photo gallery.

FAYETTEVILLE — College baseball coaches like Arkansas more than the NCAA computers when it comes to ranking the Razorbacks.

After Vanderbilt took two of three games at Arkansas over the weekend, the Razorbacks (37-14, 17-10) dropped just one spot in the USA Today coaches’ poll from No. 4 to No. 5 on Monday.

In the Ratings Percentage Index (RPI) ranking on the NCAA’s website, losing a home series to Vanderbilt caused Arkansas to tumble 10 spots to No. 29.

The contrast in rankings make it difficult to forecast Arkansas’ postseason future going into the final weekend of SEC regular-season play, though websites devoted to covering college baseball consistently have the Razorbacks hosting an NCAA regional.

“Well, I don’t know if we have a regional host wrapped up. I hope so,” Arkansas Coach Dave Van Horn said Sunday after Vanderbilt won the series finale 5-0 at Baum-Walker Stadium. “But I told our guys, we’ve got to keep playing. We’ve got to get better.”

Arkansas needs to win two games at Alabama (27-24, 10-16) this weekend to assure itself of being among four teams with first-round byes at the SEC Tournament in Hoover, Ala.

Tennessee (45-7, 22-5) is No. 1 in the coaches’ poll and RPI and has clinched the conference regular-season championship and one of the East’s two first-round byes for the SEC Tournament.

Auburn and Alabama have played one less SEC game because their series finale — tied 1-1 in the fifth inning — was canceled after multiple lightning delays.

“We still have a lot to play for,” Van Horn said. “We’d like to get a bye in the first round. We don’t have anything locked up there.

“We want to win the tournament. It would be nice if we had an opportunity to host [a regional] and come back here and play.”

Texas A&M beat Mississippi State 8-2 on Sunday to complete a sweep and tie Arkansas atop the West.

The Aggies have the tie-breaker advantage over Arkansas by virtue of winning two of three games from the Razorbacks earlier this season.

It’s the first time Texas A&M has had a share of the West lead since the next-to-last game of the 2016 regular season, according to the Bryan Eagle, when the Aggies were tied with Mississippi State.

The Aggies play this weekend at Ole Miss (33-19, 13-14), which since losing two of three games at Arkansas has won six consecutive SEC games with sweeps of Missouri and at LSU to get back in position for an NCAA Tournament bid.

“We just have to take care of our business, and we can’t rely on anybody else.”

“It’s pretty much exactly what I thought it would be,” Van Horn said of the West race. “I told the coaches five weeks back, I said 18 [SEC victories] might tie, and 19 might win it.

“You look back, and you kind of kick yourself,” Van Horn said of losing a pair of two-run games to the Aggies. “But you do it every year.

“There’s some other [close] losses in there for us that are frustrating. We won a few of those as well.”

The Razorbacks lost to Mississippi State 5-3 in 12 innings and 9-6 to Vanderbilt in 11 innings, but beat LSU 5-4 and beat Ole Miss 6-3 on a ninth-inning home run by Kendall Diggs, then beat the Rebels again 4-3.

Arkansas is 7-5 against SEC teams ranked in the coaches’ poll.

“We beat some really good people this year,” Van Horn said. “You look at Ole Miss, we won two out of the three, and now they’re back to being what everybody thought they would be.

“After they left here, they took it out on everyone. That’s kind of the way this league works.”

“It’s a very even league obviously. Having seen Tennessee play, they’re better than everybody this year, and they’ve proved it week in and week out. “Other than that, I think the league is just very balanced, very talented.

“The pitching this year — at least what we’ve faced, and we haven’t faced all the teams — has been really good. What I mean by that is the velocity, the secondary pitches.”

Vanderbilt freshman left-hander Carter Holton threw a seven-inning shutout against the Razorbacks. The finale was seven innings because the teams finished a suspended game earlier Sunday, with the Razorbacks winning 11-6.

“That’s a freshman left-hander who is throwing in the mid-90s seven straight innings,” Van Horn said. “Not too many guys that are in college that are left-handed and that are freshmen doing that.

“He was amazing. We’ll get to face him for another couple of years.”

Arkansas has a shot to win at least a share of its fourth consecutive West title after being 18-12, 20-10 and 22-8 the last three seasons, including an outright SEC championship last year.

“But man, it’s a tough league this year. Everybody’s about the same, honestly.”

No. 5 Arkansas baseball vs Alabama

WHERE Sewell-Thomas Stadium, Tuscaloosa, Ala.

THE RAZORBACKS' WEEK AHEAD