Deifel proved to be right call for Arkansas 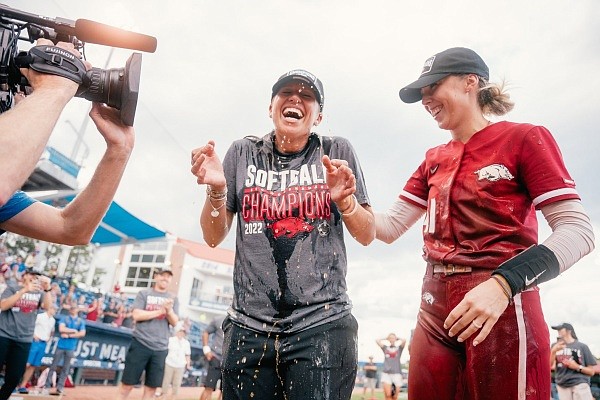 Arkansas softball coach Courtney Deifel reacts while celebrating the Razorbacks' win in the SEC softball tournament championship game on May 14, 2022, in Gainesville, Fla.

She is 41 with the energy, enthusiasm and smile of someone half her age.

When Courtney Deifel was hired by Jeff Long to coach the Arkansas Razorbacks softball team for the 2016 season she was relatively unknown.

She was the fourth coach of a program that began in 1997 and had been OK, making the NCAA Tournament five times in its first 15 years, never advancing past the regionals.

They had losing records the three seasons before Deifel was hired from Maryland where she had gone 27-27 in 2015 in her only year as a head coach.

Her hiring didn’t even create a stir, but whatever Long saw in the former college catcher at California he was dead on.

As expected her first season was laying the foundation and the Razorbacks were 1-23 in SEC play.

More from WholeHogSports: Diamond Hogs aware of the weekend ahead

In her second season the Razorbacks went 31-24 and made the NCAA Regionals.

She capped that with a 42-17 record and a trip to the Super Regionals.

As everyone knows the 2020 season was canceled but Deifel and the Razorbacks were 19-6 when college athletics came to a halt.

Whether it was home or in her office, Deifel obviously never quit working and in the last two seasons they have become a national power, one that attracts fans and interest.

They are a No. 4 overall seed in the NCAA Tournament and hosting a regional for the third time in school history.

They play Princeton at 5 p.m. Friday, while Oregon and Wichita State will play the second game.

Softball has changed since it was cast into the limelight in in the 1996 Olympics as an official medal event.

The United States won the gold beating China 1-0 and 3-1 and most games were low scoring pitcher’s duels.

Although Dot Richardson became an overnight sensation after hitting the game-winning home run against China, she was the youngest player in softball history to play in the Major Fast Pitch National Championship at 13.

She was a four-time All American at UCLA and took a break from med school to play for the USA. She is now a physician.

As more athletes became involved hitting started to be more of a factor and Deifel has been on top of not only recruiting outstanding hitters but having great pitching.

This season, the Razorbacks were 44-9, had a team batting average of .337, fourth best in the nation and hit 102 home runs, the average of 1.92 per game is fifth-best in the country.

Their 388 runs scored are fourth-best.

They won’t be taking anyone lightly, including Princeton, which was 27-15-2 on the season, but a side note, when you go to Princeton’s website, there is only one mention of athletics, a link at the very bottom.

Of course it is an academic school who would think it is very smart to come to Fayetteville and knock off the home team.

The Razorbacks home field, Bogle Park, can handle a little more than 1,500. Tickets are $30 for adults, $15 for children for the chance to see one of the most exciting teams in the country.

From one conference win seven years ago to two-time SEC champions has been a storybook saga written by Courtney Deifel.