McGlothern standing out at CB for right reasons 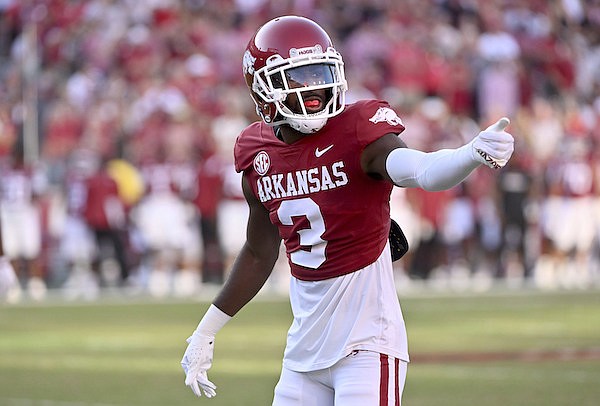 Attempting to hit receiver Jermaine Burton for a momentum-changing play, Milroe threw the ball 50-plus yards downfield to the Razorbacks’ 25. With a sweeping right arm, Arkansas’ top cornerback broke up the pass.

But for McGlothern, a player who teammates and coaches have relayed numerous times plays with great swagger, his fun had only just begun.

After the pass fell incomplete, McGlothern skipped around Burton as the receiver rose to his feet. And on Burton’s long jog back to the line of scrimmage, the cornerback was right there alongside him, the entire way.

More from WholeHogSports: Pittman says Jefferson yet to practice with Razorbacks this week

The shows of personality and flair from McGlothern are becoming more commonplace.

“He takes everything very personal,” Arkansas coach Sam Pittman said Wednesday. “He works extremely hard, but he believes in himself. I think his own self-confidence … he’s obviously long and can run and those things, and he has played a lot of ball.”

Through five games, the LSU transfer and former standout at Klein Oak (Texas) High School has every reason to be confident and, at times, showman-like. It is warranted.

McGlothern is tied for the SEC lead with three interceptions, one pick shy of the FBS lead. According to Pro Football Focus analytics, McGlothern is the Razorbacks’ top-rated corner in terms of coverage grade (75.1).

Opposing quarterbacks have not found much success targeting receivers who are matched up with McGlothern. PFF numbers show he has allowed 5 catches on 20 targets for 32 yards.

By comparison, cornerback Hudson Clark and nickel back Myles Slusher have allowed matchups to pick up 179 yards (18 targets) and 136 yards (9 targets) through the air, respectively.

Among cornerbacks who have been targeted 20 times, McGlothern’s five catches allowed are tied for the fewest in the SEC. Auburn’s D.J. James has also given up five completions on 21 targets.

“I think it's his competitiveness,” Pittman said when asked what has stood out in McGlothern’s first five games with the program. “But I think what separates him is, A, he has got really good ball skills, and, B, he’s got a lot of confidence and has played a lot of ball.

“He’s certainly picked up what we’re trying to do very quickly.”

More from WholeHogSports: Rally and hit is the game plan for Hogs' defense

Mississippi State may be best served to steer clear of McGlothern’s side of the field Saturday in Starkville, Miss. In LSU’s meeting with the Bulldogs last season, Mississippi State completed just 2 of 7 passes for 10 yards against the corner over 71 coverage snaps, per PFF.

McGlothern posted a season-best tackling grade (81.1) in the game and totaled five stops.

Mississippi State coach Mike Leach on Wednesday essentially declined to comment on McGlothern’s play this season. In addition to his takeaways, including a one-handed interception inside the Arkansas 5 against Alabama, McGlothern has three pass breakups.

The Razorbacks have had their share of struggles in pass defense this fall, and rank 124th out of 131 FBS teams in yards per game. But McGlothern has more than held up his end of the bargain.