Limmer standing out on Hogs' O-line 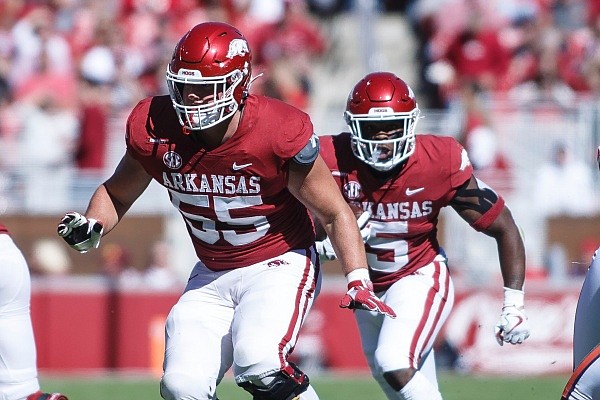 Arkansas Running Back Raheim Sanders (5) carries the ball led by Arkansas Offensive Lineman Beaux Limmer (55) on Saturday, Oct. 16, 2021, during the first half of play at Reynolds Razorback Stadium, Fayetteville.

FAYETTEVILLE — The Monday prior to Arkansas’ home game against Missouri State, a reporter brought to Razorbacks coach Sam Pittman’s attention that one of his linebacker received a high grade from Pro Football Focus.

The player referenced was Chris “Pooh” Paul, a redshirt freshman from Cordele, Ga., who played a career-high 19 snaps against South Carolina and finished with five tackles. Paul was given an overall defense mark of 79.8.

A smile again came to the old-school coach’s face Wednesday when told starting offensive lineman Beaux Limmer is rated one of the Football Bowl Subdivision's top guards. Pittman has joked with players in the past about their standing in PFF’s grading system.

More from WholeHogSports: VIDEO – Pittman speaks with reporters on Wednesday

As a former offensive line coach, though, Pittman is undoubtedly proud of his unit’s play this season and what Limmer has provided for an offense averaging 500.3 yards per game.

Limmer enters Saturday’s game against Texas A&M in Arlington, Texas, as the nation’s No. 3 guard in terms of overall offense grade (85.7) and run-blocking (88.8). Pittman said Limmer is comfortable up front playing between center Ricky Stromberg and right tackle Dalton Wagner, who have also shown well through three games.

Limmer has not missed any of Arkansas’ 228 offensive snaps this season. He has allowed one hit on quarterback KJ Jefferson and two hurries, per PFF.

As the Razorbacks turned to their passing game more against Missouri State than on the previous two Saturdays, Limmer came out clean. Bears defenders matched up with him did not register a pressure or hit on Jefferson over 35 snaps.

Arkansas star running back Raheim “Rocket” Sanders has found great success on the ground when running off Limmer’s left and right side. He has combined for 202 yards and 1 touchdown on 28 such carries, according to PFF.

Pittman added that Limmer isn’t one to talk much about accolades or his strong play. In other words, he is Pittman’s kind of player.

Since recording a 57.2 overall grade in Arkansas’ SEC-only schedule in 2020, Limmer has improved the last two seasons. He finished at 76.8 overall a season ago, and the lineman credits the Razorbacks’ strength staff and conditioning program for that.

Pittman in the preseason noted Limmer was a summer standout and labeled him “a freak” in the weight room. Limmer told reporters he has put up at least 500 pounds on bench press.

“It’s definitely an honor to have the head coach say something as big as that. It’s good to hear,” Limmer said in late August. “(The strength staff) has just helped me so much. Not only with strength, but agility and speed training, as well.

“They’ve just helped me make great strides, so props to them.”