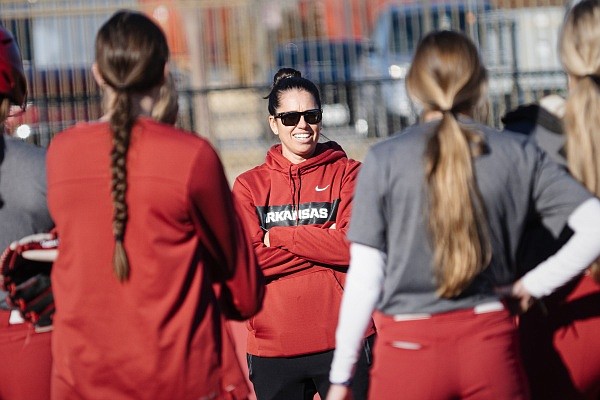 FAYETTEVILLE — Arkansas softball coach Courtney Deifel said defense should be a calling card for this year’s group on a Zoom call with the media on Saturday.

“When you’re looking at the skill piece of it, this team can really play defense,” Deifel said. “It doesn’t matter who we put out there. They can pick it. They can run it down. Very, very skilled defensively and this team can run.

The Razorbacks hit the Bogle Park field Sunday afternoon for the first official practice of the season with media in attendance.

Arkansas has been known for its power bats under Deifel. She also said the team’s youth could be seen as a challenge by others, but Deifel said it can be a positive.

“I think one of the biggest differences, which people are using against us, is that we’re young,” Deifel said. “I think that’s just as much a strength as it could be a question mark to people outside of our bubble.

“But I think our youth is going to play to our advantage. I also think we’re going to have some challenges with that and I’m really, really looking forward to what this team is going to do. I think you’re recruiting the right kids, just fine-tuning what they do.

“Obviously, they already compete at a really high level. They caught your eye with their skillset.”

The ball was still flying out of Bogle Park with great frequency Sunday.

Junior utility player Hannah Gammill, a first-team NFCA All-American a year ago and Beebe native, said the group is coming together well off the field already.

“This is, in my opinion, off the field, this has been one of the better connections that we’ve had,” Gammill said following Sunday’s workout. “On the field, we obviously still have some work to do getting used to each other, but I feel like we’re growing and time will take care of that.

“Connection on the field and off the field, I feel, is stronger than it has been in the past. … I would say if we are fully connected as a team, I think everything else will take care of itself. Learning newcomers and how they play is the most important part. It comes from practice. I go over and hang out, building friendship and relationships.”

The Razorbacks brought in a nationally acclaimed signing class, which includes nine freshmen. Several are ranked inside the 2022 Extra Inning Softball’s Top 100 list.

Kylie Brockman of Kansas City, Kan., is rated No. 19 in the Extra Inning list. She is also a two-time powerlifting state champion and Kansas 5A state runner-up in javelin.

Others in the freshmen group include catcher/infielder Kennedy Miller, who was ranked No. 57, along with infielder/utility player Jayden Wells (27) of Paris, Ark., and pitcher/utility player Kasey Wood (36) of Bentonville. Deifel likes the group of newcomers – freshmen and transfers – she has brought in.

More from WholeHogSports: Poffenbarger leads Arkansas to win at Missouri on Sunday

“I think we’re in a good spot,” she added. “We have a really strong base … incredibly talented, athletic and really coachable. It makes those fine-tuning things a lot more easy. Nothing’s easy, but they’re so receptive. They just want to be as good as they can be.”

Deifel is also eager to have opponents be forced to prepare for the group’s speed and athleticism more so than just the power bats. The Razorbacks drew the moniker “Bogle Bombers” the last couple of years because of their penchant for the long ball.

“You can’t just put the corners behind the bases and get ready for a hard-hit ball,” Deifel said. “You have to defend everything. It just opens up the game so much more. But then also two extra steps in the outfield on that gap shot, it’s huge, huge on both sides.

“I would hope it’s harder for people to prepare for us.”

The Razorbacks will have a little more than one month to prepare for their season opener on Feb. 10 in Las Vegas as part of the Rebel Kickoff. They will then play in the Taxact Clearwater Invitational in Florida one week later.

Arkansas will later play a string of 16 games at Bogle Park in Fayetteville. The team's home opener against Arizona is slated for Feb. 23.