Hogs' defense no-shows in 2nd half at Vandy 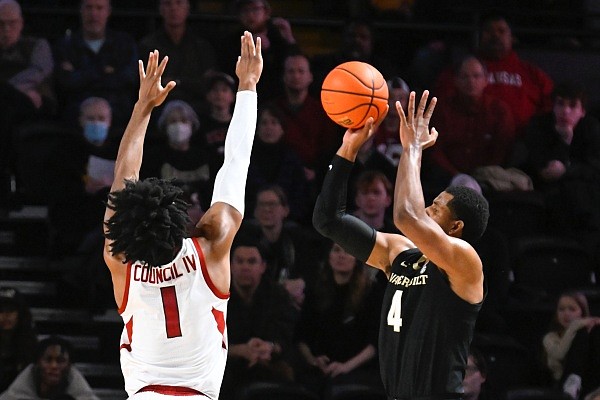 No. 15 Arkansas had its best offensive performance in SEC play by a fairly significant margin at Vanderbilt on Saturday.

According to KenPom data, the Razorbacks posted an offensive efficiency rating of 122.2, which was their fourth-best mark of the season. Arkansas also had three players finish with at least 17 points.

Ricky Council totaled a game-high 24 points on 12 shots, Anthony Black had 18 and Davonte Davis added 17. Offense was not the issue.

But on the other end of the floor, the Razorbacks were dreadful, especially in the second half of their 97-84 loss to the Commodores in Nashville, Tenn. KenPom data shows Arkansas allowed Vanderbilt to notch an offensive efficiency rating of 141.1.

Not only is that the Razorbacks’ worst defensive efficiency mark of the season and in the four-year Eric Musselman era, it is the program’s fourth worst in the KenPom database, which dates to the 2002 season.

“I’ve coached a lot of games and can't remember a defensive team giving up 63 points in a half,” Musselman said Saturday. “You know, as the game progressed, the competitive nature slipped, so you get the results of a team scoring 97 points on you. From a competitive standpoint, we have to be much more competitive.

“For much of the season, offensive struggle has been the problem. Tonight, certainly, (defense) was a major, major issue.”

More from WholeHogSports: Commodores rally to beat Razorbacks behind 63-point second half

In the first half Saturday, Arkansas limited Vanderbilt to 36.7% shooting and forced seven turnovers, and the Razorbacks led 42-34 at halftime. The Commodores, though, erupted after halftime and knocked down 6 of 9 three-point attempts.

Vanderbilt hit its first 5 three-point looks of the second half and 6 of its first 7 overall. From the 1:43 mark in the first half to 13:41 remaining, the Commodores hit seven consecutive triples.

The lapse in three-point defense after halftime was a theme in both of Arkansas’ losses this week. Alabama knocked down 7 of 10 attempts Wednesday, including three during a critical 49-second span in the final 5 minutes.

Opponents are now shooting 37.9% from deep against the Razorbacks in SEC play. Council said it is a combination of Arkansas’ breakdowns and quality shot-making from opposing teams.

“Obviously we had a good first half, then they come out and hit one then hit another, their 5-man hits one. It’s obviously tough. Now it’s definitely a common theme.”

Asked about Musselman’s comments on the team’s competitive nature defensively, Council said it seemed as if Vanderbilt scored each time down the floor. He’s not far off.

The Commodores wound up getting points on 29 of 33 second-half possessions, according to StatBroadcast. They scored 1.909 points per possession in the final 20 minutes.

Vanderbilt’s Jordan Wright (15), Liam Robbins (14), Trey Thomas (13) and Tyrin Lawrence (10) all scored in double figures during the 63-point second half. Forward Myles Stute also pitched in eight of his 15 points in that dominant stretch.

Their efforts and scoring punch allowed the Commodores to erase a 10-point Arkansas lead and flip it into a 10-point Vanderbilt lead in less than 10 minutes.

Thomas was the biggest thorn in the Razorbacks’ side, knocking down 3 threes, but Robbins was stout, too, with three blocks on the other end. Lawrence scored a team-high 22 points for the Commodores.

He had 19 total points in Vanderbilt’s first three SEC games.

“Lawrence dominated us off the dribble,” Musselman said. “The scouting report was no dribble-drives left, and he continually went left and blew by us. … Lawrence was more aggressive with his hard dribble-drive left than maybe what our guys understood.

“And I thought Robbins was absolutely incredible in the second half. I thought he was a dominant force.”

Asked what the Razorbacks can improve to help get the season turned around, Musselman pointed to playing harder and keeping ball handlers in front on a consistent basis.

“I mean, we've lost three straight games by double digits,” he said. “I don't recall a team we've coached doing that unless it was at the NBA level. Disappointed with the competitiveness. Disappointed with when a team makes a run, combating that run.

“But, again, we have a whole group of guys that are learning, and we're trying to learn, as well.”

Arkansas’ next game is Wednesday at Missouri against a Tigers team that will likely be hungry following back-to-back road losses. On its home floor, Missouri has already beaten Kentucky and Vanderbilt.