'He did a great job': Walsh's impact felt vs. Rebels 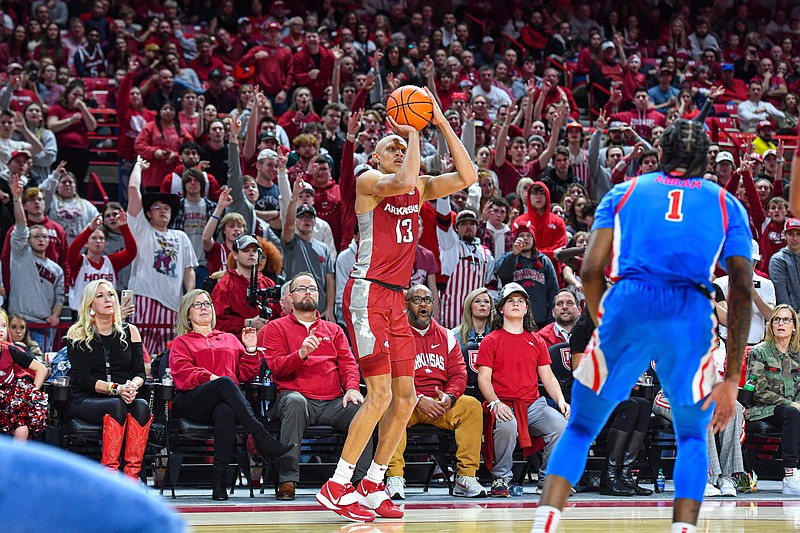 Arkansas guard/forward Jordan Walsh shoots as Ole Miss guard Amaree Abram defends on Saturday, Jan. 21, 2023, during the second half of the Razorbacks’ 69-57 win over the Rebels at Bud Walton Arena in Fayetteville. Visit nwaonline.com/photo for the photo gallery.

FAYETTEVILLE — In Arkansas freshman Jordan Walsh’s opinion, his foul situation in Southeastern Conference play officially got out of hand Wednesday at Missouri.

The first-year wing scored 12 points, but fouled out in 13 minutes against the Tigers. It marked the fourth league game in which he had been whistled for at least four fouls.

His fortunes changed Saturday against Ole Miss, and No. 25 Arkansas greatly benefitted from his availability in its 69-57 victory that snapped a four-game slide in the SEC. Walsh finished with 13 points on 5 of 9 from the floor, 7 rebounds and 1 steal.

And he was hit with only one foul, which gave way to him playing every minute for the first time as a Razorback.

“I knew somebody was going to say something about fouls,” Walsh joked. “They started doing an over-under on my fouls, like within the staff. It’s actually funny. They’re like you’re at four fouls: over-under? I’m like, ‘Yo, come on.’

Arkansas coach Eric Musselman does, too. After Wednesday’s game, he said losing Walsh was “crucial” in Missouri overcoming a late 10-point deficit and winning, because the Razorbacks were plus-13 in his time on the floor.

During his post-game press conference Saturday, Musselman even joked that if the game was still ongoing that Walsh would be in the lineup.

“Love the fact that he was struggling offensively, continued to shoot the ball, continued to work,” Musselman said. “For a freshman small forward, he rebounded the ball, shot the ball and I thought — just as we’ve talked about Davonte Davis’ defense — Jordan did a great job on (Jaemyn) Brakefield, No. 4, who is their second guy they look to go to offensively.”

Brakefield totaled 8 points on 3-of-4 shooting in 29 minutes.

“He did a great job,” Musselman said. “We need him to continue to play with aggressiveness and also to understand the guy that he's guarding's tendencies the best that he can.”

Other than 3 second-half turnovers, Walsh was strong after halftime and contributed 9 points on 3 of 4 from the floor, including 2 of 2 beyond the arc. He matched freshman guard Joseph Pinion with a team-high four rebounds.

Walsh’s first triple after the break put the Razorbacks ahead 46-34. They led by at least 10 the rest of the way.

His final three-pointer, made from the right corner and assisted by freshman Anthony Black, handed Arkansas its largest lead of the game at 63-42. Davis added that as long as Walsh continues to play with great effort, things will keep falling into place for him.

“It helps us out a lot,” Davis said. “He can play in the dunker spot, he can space the floor out, play in the corner, can shoot the three, make the three. He can play defense, get deflections. That’s everything you need on the floor to play basketball.

“As he continues to pick that up and strive for greatness, I think he can play at a higher and higher level every single game and every single week.”