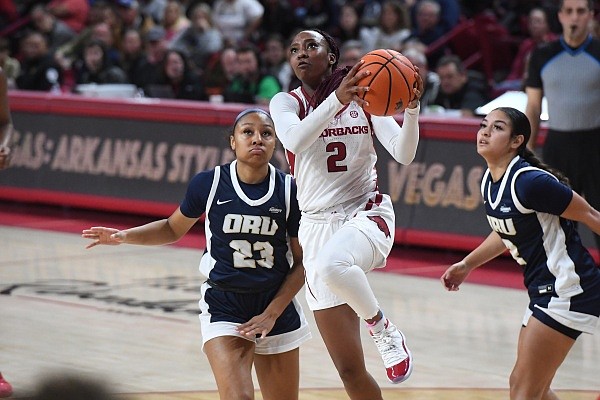 Arkansas' Samara Spencer drives to the rim and readies for a layup during the Razorbacks' game against Oral Roberts on Dec. 4, 2022, in Bud Walton Arena.

FAYETTEVILLE— Samara Spencer scored a career-high 32 points on her 20th birthday and Arkansas pulled away from Oral Roberts in the second half Sunday to win 92-58 in Bud Walton Arena.

Spencer became the first Arkansas player to score 30-plus points since her teammate Makayla Daniels put up 34 against Creighton on Dec. 21, 2021. The sophomore guard from Fort Lauderdale, Fla., was electric offensively, hitting 6 of 8 three-point attempts in 31 minutes.

“In high school I played on my birthday and we lost to our rival,” Spencer said. “This was kind of a make-up game, I feel like.”

She scored 17 of her points during a dominant second half for the Razorbacks.

“Just a little bit of a different approach,” Arkansas coach Mike Neighbors said of Spencer. “She knew she was going to have it in her hands a lot and had to be relentless in that. You don’t sit there and go, ‘Sam’s going to get us 32 tonight.’

“I thought on her birthday that was a really fun thing for her to get to celebrate.”

More from WholeHogSports: What to know about Kansas, Arkansas' opponent in the Liberty Bowl

Arkansas led by just four at intermission, but outscored the Golden Eagles 51-21 in the final 20 minutes. The win gave Arkansas (10-0) its best start since the 2013-14 season.

“I was really pleased with how every single person found a way to impact the game,” Neighbors said. “I thought after the second quarter we really settled in defensively. In that third quarter, boy, it was about as good as we’ve been.”

For a second straight game, Arkansas came out shooting hot. The Razorbacks scored 15 points in the contest’s opening five minutes to jump ahead of the Golden Eagles early.

Spencer highlighted the scoring spree by knocking down 2 threes in as many tries.

Tirzah Moore did what she could to have Oral Roberts (2-7) hang around early. She scored eight points on 75% shooting in the first quarter, keeping the Golden Eagles within striking distance. Arkansas owned a 22-16 lead entering the second quarter, and Spencer scored 13 points.

Oral Roberts missed its first 11 three-point looks in the game, but that drought came to an end when Ariel Walker, a graduate student from Ozark, hit a corner three with four seconds left in the second quarter.

It brought the Golden Eagles within four.

“I thought that gave them a lot of momentum,” Neighbors said.

Spencer nearly manufactured some birthday magic at the first-half buzzer, finding the bottom of the net on a three-quarter court heave. After officials reviewed the shot, they determined it left her fingertips fractions of a second too late.

The Razorbacks led 41-37 at halftime.

“There was some talk at halftime about the shots they were getting,” Neighbors said. “They were all layups. They were just driving us and getting to the basket, and they were forcing us to settle for threes.”

The third quarter was all Arkansas. The Razorbacks hit their first four shots, including Spencer’s fourth three of the game, to pull ahead 50-41.

She continued to dazzle in the frame, going a perfect 6 of 6 from the floor, including three triples to reach 31 points by quarter’s end.

Oral Roberts was held to 20% shooting in the period while Arkansas shot a sizzling 76.5%. The Razorbacks outscored the Golden Eagles 32-10 to put the game well away before the fourth quarter.

“When we went into half we kind of prided ourselves on coming back out and just being ourselves,” Spencer said. “We have kind of gotten out of our roles toward the end of the second quarter. We got back to playing our game.”

Arkansas finished the job in the fourth quarter, winning the period 19-11. The Razorbacks held Oral Roberts to 2 of 26 (7.7%) from three in the game.

“They shoot the ball better, normally, than they did tonight,” Neighbors said. “But I thought our length really bothered them some. Most nights they are not going to go 2 for 26. Again, credit to our defense, credit to our effort.

“We rebounded the ball well after we didn’t the other night, so it was good to see that improvement.”

Four different Razorbacks scored in double figures, including redshirt freshman Saylor Poffenbarger. She stuffed the stat sheet for the Razorbacks, posting her first career double-double with 14 points and 13 rebounds.

“I feel like I’m kind of going into my role, and it’s becoming really fun,” Poffenbarger said. “I think this team is really special.”

“She makes the right pass at the right time,” Neighbors said of Poffenbarger. “Just so versatile. She played four offensive positions and guarded five defensive positions today. For her to continue to be that person for us, it’s invaluable.”

Jersey Wolfenbarger neared a double-double with nine points and 12 rebounds. Chrissy Carr and Maryam Dauda joined Spencer and Poffenbarger in double figures with 15 and 10 points, respectively.

Arkansas out-rebounded the Golden Eagles by 16, and the Razorbacks’ 57 rebounds were a season best.

Daniels, who has started all 97 games played as a Razorback, was inactive for the contest with a left foot injury. Neighbors listed her as day-to-day and said her not playing was as a “preventative” measure.

After playing five games in 11 days, Arkansas gets a three-day pause before its next game. The Razorbacks are set to host Lamar on Thursday at 7 p.m. inside Bud Walton Arena.