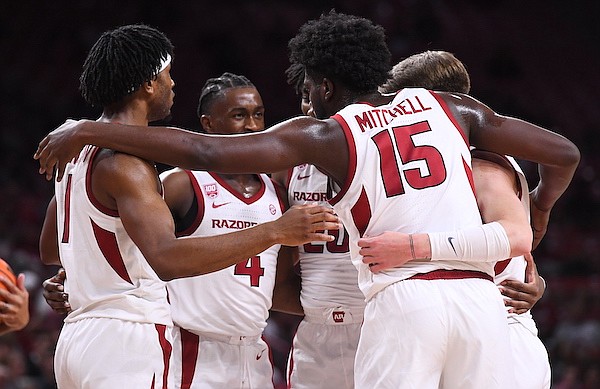 Arkansas players huddle during a break in the action in the Razorbacks' exhibition against Rogers (Okla.) State on Oct. 24, 2022, in Fayetteville.

FAYETTEVILLE — Mississippi State Coach Chris Jans got a taste of what it’s like to play the University of Arkansas basketball team when he was at New Mexico State last season and the Razorbacks beat the Aggies 53-48 in a second-round NCAA Tournament game in Buffalo, N.Y.

“If you like low-scoring games, you really enjoyed it,” Jans said. “But it was a rock fight.

“You knew going in it was going to be a tough challenge for us. They just had so much length and athleticism, and obviously, very well-coached and knew who they were.

“To be honest with you, I still haven’t watched the game. I will at some point. Hopefully, before the season starts.

“We had our chances, we had our opportunities, but they kept fending us off … and did an excellent job of figuring out a way to win.”

The Arkansas team Jans and Mississippi State will face on Feb. 15 in Walton Arena is far different than the one that beat New Mexico State.

Williams is a rookie with the NBA’s Oklahoma City Thunder after being a second-round draft pick.

Junior guard Davonte “Devo” Davis and senior forward Kamani Johnson are the only returning scholarship players for the Razorbacks, who beat Gonzaga 74-68 in the West Regional semifinals — the program’s first victory over a No. 1 seed — before losing to Duke 78-69 one game short of the Final Four.

But expectations are higher than ever for the Razorbacks going into Coach Eric Musselman’s fourth season at Arkansas.

The Razorbacks, who were No. 17 in last season’s final Associated Press poll before the NCAA Tournament, are ranked No. 10 in the AP preseason poll for the first time since returning all of their starters from the 1994 national championship team.

Musselman and his staff signed arguably the top recruiting class in school history and added key players through the transfer portal.

Arkansas matched defending national champion Kansas and Duke with having the most signees from this year’s McDonald’s team.

Derek Hood and Kareem Reid, freshman teammates for the Razorbacks in 1995-96, were both McDonald’s All-Americans, but Reid signed a year earlier than Hood, then sat out waiting to gain his eligibility.

Smith, who is from Jacksonville and played at North Little Rock High School, was named the top high school player in the nation by USA Today. He’s the second Arkansas signee to be a national player of the year pick along with Corliss Williamson, a forward from Russellville who was the Gatorade player of the year in 1992.

Williamson became a two-time All-American, who as a sophomore led the 1994 team to Arkansas’ lone national title in basketball.

Smith, a preseason All-SEC first team pick by the media, isn’t expected to be around for his sophomore season. He’s projected as a top five pick for the 2023 NBA Draft. Black and Walsh also are projected as first-round picks in most 2023 mock drafts.

“Well, you’ve just got to win every game and it’ll work out fine,” Kentucky Coach John Calipari, who has signed 41 McDonald’s All-Americans with the Wildcats since 2009, said with a smile when asked about expectations for Musselman and Arkansas. “I respect him, and he’ll do fine”

More from WholeHogSports: Brewer believes Hogs can get over the hump in 2023

“As a team we’re probably circled on a lot of schedules, and then individually we probably have some players that will be circled when people look at our roster,” Musselman said. “So you’ve got to understand the responsibility that comes with that by being overly mentally prepared, by being physically prepared.”

Musselman, 73-28 at Arkansas for the most victories in the SEC the previous three seasons, was 110-34 at Nevada in four seasons before landing the UA job.

Utilizing the transfer portal to land players such as twins Cody and Caleb Martin — both playing in the NBA — and Jordan Caroline at Nevada, Musselman led the Wolf Pack to three consecutive NCAA Tournament appearances from 2017-19.

After Nevada returned the bulk of its roster from a team that made the NCAA Tournament Sweet 16 in 2018, the Wolf Pack opened the 2018-19 season ranked No. 7 and rose as high as No. 5.

“We did go through it at Nevada where 17 straight weeks we were in the top 10,” Musselman said of dealing with high expectations going into a season. “There’s added pressure, let me put it like that.

“So how you can alleviate some of that pressure, meaning our coaching staff and any of us that are in leadership positions, we have to make sure that the guys enjoy the season as well.”

“[Musselman] has taken that program and made it his own and done it his way,” Jans said. “He did it at Nevada. Had a lot of success with recruiting and transfers specifically.

“He has taken that blueprint over to Arkansas, and he has been one of the better college basketball teams since they’ve been there each and every year.

“I think it speaks volumes for him and his staff to their ability to track players that want to play for him and their style and that university. So he has obviously got that program in great shape.”

After Musselman led Arkansas to a 20-12 record in his first season, the Razorbacks lost four starters, including co-SEC player of the year Mason Jones and Isaiah Joe, a second-round draft pick by the Philadelphia 76ers who is now with Oklahoma City.

In Musselman’s second season, the Razorbacks reloaded with freshman guard Moses Moody — who became a first-round pick by the Golden State Warriors — and impact transfers in Notae, Justin Smith and Jalen Tate. Arkansas also got major contributions from Williams and Davis to advance to the NCAA Tournament Elite Eight for the first time since 1995.

Musselman, an NBA coach with Golden State and Sacramento, said his experience coaching in the CBA and G-League has helped in roster management at the college level where the transfer portal has greatly increased player movement.

“So just looking at our own team with only two returners, a lot of the format that we’ve used this summer in implementing things both offensively and defensively is much the same that we used while coaching in the minor leagues

“And certainly a changing, fluctuating roster, I don’t flinch with that at all. Probably healthy that they hear a different voice every couple of years or whatever.

“So maybe the way that college basketball is right now with the freedom of movement with players is kind of equivalent to free agency at the pro level. And with my background, I’m more equipped to coach today than maybe I would have been 20 years ago in college.”

In constructing this season’s roster the Razorbacks had the advantage of playing four exhibition games in Europe in August.

“The tour was really good for us, because so many new players were able to see areas of weakness, areas of strength,” Musselman said. “Then maybe most importantly for September and October, we saw areas we’ve got to try to improve on going into the season.”

The Razorbacks used four different starting lineups in their victories over Valencia Seleccion (107-59), Catalan Select (98-86), Orange I Basket Bassano (75-54) and the Bakken Bears (70-59). All 13 scholarship players got at least one start.

“A lot of guys got opportunities,” Musselman said. “We got to see some things, some different combinations.”

Musselman will narrow the rotation, likely to eight players and possibly nine, by the time SEC play begins.

But a challenging non-conference schedule will allow Musselman to make roster adjustments against high-level competition.

The Razorbacks play Louisville in their opener at the Maui Invitational and their second opponent will be either No. 9 Creighton or No. 25 Texas Tech.

Other ranked teams Arkansas could play in Maui are No. 17 Arizona and No. 19 San Diego State.

Arkansas takes on Oklahoma in Tulsa before SEC play and has a road trip to Baylor in the SEC/Big 12 Challenge in the middle of its conference schedule.

“I think it’s one of the hardest schedules that we’ve been a part of, if not the hardest,” Musselman said. “Obviously, the Maui field is really challenging.

“We’re really young and not only are we really young, we have a lot of new pieces. And so we’re continuing to try to improve.”

Texas A&M just missed giving the SEC six ranked teams. The Aggies are the top team in the “others receiving votes” category, making them No. 26.

“I think the league is phenomenal,” Musselman said. “Star players. Players that are going to play in the NBA. Incredible coaching.

“Every single night that you play somebody, that particular team in our conference can beat anybody. Not just in conference, but anybody in our league I think could beat anybody nationally as well.

“It’s a difficult conference to play in and win at a high level.”