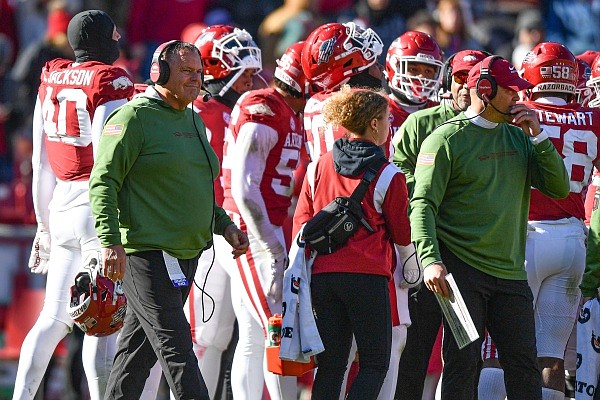 Arkansas head coach Sam Pittman meets with his team on the sideline during a timeout, Saturday, Nov. 12, 2022, during the fourth quarter of the Razorbacks’ 13-10 loss to LSU at Donald W. Reynolds Razorback Stadium in Fayetteville.

FAYETTEVILLE — University of Arkansas Coach Sam Pittman was in a slightly reflective mood at his weekly news conference on Monday after being asked about injuries, expectations and frustrated fans heading into Saturday’s 6:30 p.m. game against well-regarded Ole Miss.

Pittman said expectations are a great thing and he understands the discontent from the fan base after back-to-back home losses to Liberty (21-19) and No. 7 LSU (13-10) dropped the Hogs to 5-5 overall, 2-4 in the SEC, and needing another win to get bowl eligible.

“We haven’t been able to win the close games, you know,” he said. “We’ve got to figure out how to win close games and you’re going to have to do that every year. If you don’t, your record is going to be from 9-10 wins to 6 or 5. That’s just how it is and I think if you look over most all the teams in the SEC it’s that way as well.”

A perfect example of that is the Ole Miss game last year. Arkansas scored on KJ Jefferson’s 9-yard pass to Warren Thompson on the final play of the game with the Hogs trailing 52-45. Pittman elected to go for a two-point conversion and the win, but the Rebels forced an errant pass to hold on 52-51 at home.

Pittman is aware of grumbling in the fan base. The topics have wandered the scale on both sides of the ball.

There have been slow starts virtually all season, often on both sides. Pass defense and tackling problems have loomed at various points in the year.

In the last couple of weeks, the offensive line and running backs have looked out of sorts and a step slow in the running game, which is still No. 12 in the country at 222.1 yards per game.

Quarterback play, particularly with KJ Jefferson out, has been shaky. And Jefferson is still in a wait-and-see mode with a clavicle injury that kept him out of last week’s loss to LSU, even though he practiced on Monday.

Pittman put the situation in a bigger picture.

“With being 5-5 and all the expectations, I’d rather have the expectations be high and take … the criticism than they go, ‘Oh well, you played LSU to 13-10 and they’re West Division champs,’” Pittman said.

“We don’t want any of that. We want to win. It doesn’t matter who we play.

The brutal schedule has not taken a week off, even during non-conference games, and that doesn’t change this week.

The Rebels (8-2, 4-2), who started 8-0 and ranked as high as No. 7 in The Associated Press poll, were still in contention to make their first SEC Championship Game before falling 30-24 at home to Alabama last week.

Ole Miss is No. 14 in the AP poll this week and awaiting how far it will fall in the College Football Playoff rankings after being No. 11 last week.

“Ole Miss, obviously very explosive on offense,” Pittman said. “They’re running the ball as well as anybody in the SEC.

Pittman also spoke on the health of key players, such as Jefferson and other team leaders. Preseason All-America safety Jalen Catalon has been out since the opener due to reconstructive shoulder surgery, setting off a string of injury problems for the Arkansas secondary.

Dalton Wagner’s back injury was acting up last week, meaning three of the team’s original four captains were out of action against LSU.

“I think it’s a big thing,” Pittman said regarding the injuries. “Obviously they’re ‘ones’ for a reason. Then if you have a special guy like KJ, a special guy like Catalon, you know those guys are special. They could play for anybody in our league and hopefully will have a pro career and things of that nature.

Pittman said the team’s race to success in his season season, capped by a 24-10 Outback Bowl win over Penn State, helped create the current expectations.

“So, did we go faster than even what I thought we would last year?” Pittman asked. “Probably. But I was happy with it. We’re disappointed with where we are. But we can wallow in or we can get bowl eligible. I think you saw Saturday that our team wants to go to postseason play. And I think you’ll see it again Saturday.”