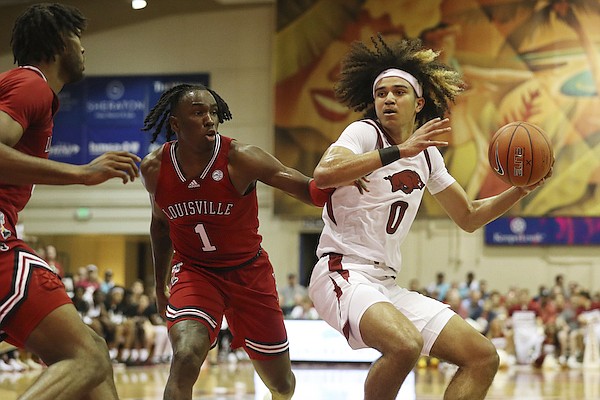 Arkansas opened play at the Maui Invitational with a convincing 80-54 victory over Louisville on Monday at Lahaina Civic Center.

The ninth-ranked Razorbacks put on a show in their first nationally televised game of the season, flying around the rim against the overmatched Cardinals. Arkansas scored 38 points on dunks and layups, including 16 during a 17-0 run in the second half that blew open the game.

Louisville committed eight turnovers during the run and went nearly three minutes without attempting a shot. Arkansas scored 29 points off of 22 turnovers by the Cardinals.

The Razorbacks (4-0) never trailed, led 36-28 at halftime and led by as many as 27 points in the second half to the delight of a large contingent of red-clad supporters who helped pack the 2,400-seat arena.

Black led Arkansas with 26 points and added 6 assists and 3 rebounds in 35 minutes. Black made 9 of 11 field goals, including 3 of 5 from three-point range, and was perfect on 5 free-throw attempts.

"I think a lot of us grew up watching this tournament, so we kind of saw what the atmosphere was going to be like," Black said. "But just playing in it is always different. I think we had great support from the fans and that kind of fueled our energy."

"I just thought we played really good defense, which is what we've done through four games," said Arkansas coach Eric Musselman, whose team is allowing 54 points per game.

Arkansas (4-0) will play 10th-ranked Creighton on Tuesday at 7 p.m. Central in the tournament semifinals. The Bluejays (5-0) defeated Texas Tech 76-65 in their first game at the tournament Monday.

More from WholeHogSports: How to watch, listen to Arkansas-Creighton

Louisville fell to 0-4 in its first season under coach Kenny Payne, a former Kentucky assistant who played for the Cardinals’ national championship team in 1986. Louisville had lost three consecutive one-point decisions prior to Monday.

Ricky Council added 15 points and Makhel Mitchell had 12 points off the bench for the Razorbacks. Mitchell and his twin brother Makhi each had six rebounds to lead Arkansas.

"They kept the energy and brought it more, and we fazed out," Payne said of Arkansas. "I thought they out-competed us. They wanted it more.

"But that's what great teams do. There's a reason they're top 10 in the country, and they showed it."

The Razorbacks played their fourth consecutive game without freshman guard Nick Smith, who is managing a knee injury. Smith went through pre-game warmups, but was ruled out prior to the start of the game.