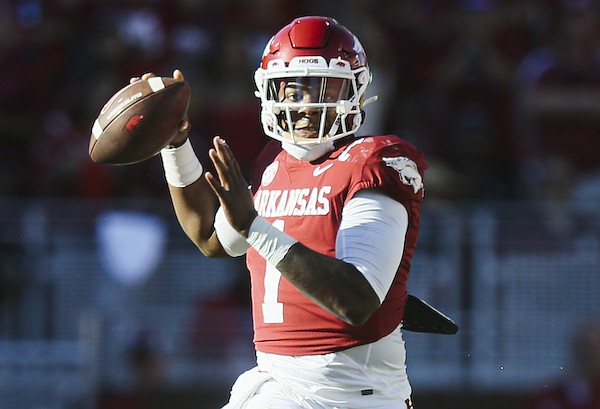 Jefferson, the Razorbacks’ second-year starter from Sardis, Miss., was removed from last Saturday’s 49-26 home loss to then-No. 2 Alabama after he “hit his head” on the playing field in the fourth quarter, Arkansas coach Sam Pittman said after the game. He was soon replaced by Cade Fortin, a backup and transfer from South Florida.

Pittman said Monday afternoon that Jefferson is experiencing “some mild symptoms,” but declined to say whether or not the quarterback is in concussion protocols.

“Those are things that our doctors look at,” Pittman said. “Each kid is a little bit different with how they react. We've had guys back within three to four days. We've had guys out for 27 days.”

Jefferson has completed 66.1% of his 80 pass attempts for 1,096 yards and 9 touchdowns, and has been intercepted once. He is also Arkansas’ second-leading rusher with 312 yards and four touchdowns.

Asked if there is a day during game week in which a player must return to practice in some capacity in order to play on Saturdays, Pittman said Wednesday is typically the cutoff.

“They have to do something (by then) or we pretty much count them out for the game,” he said. “Wednesday is that day.”

In 2021, Jefferson had his most efficient game of the season against Mississippi State. He completed 19 of 23 passes for 191 yards and 1 touchdown in Arkansas’ 31-28 home win.

Last Saturday with Jefferson sidelined, Fortin entered and completed 4 of 10 passes for 35 yards. Pittman reiterated Monday that the decision had been made for weeks that Fortin would be Jefferson’s replacement should he have to leave a game for any reason.

On the team-issued depth chart, Fortin for the first time this season is listed as the backup. Malik Hornsby, who practiced some at receiver during the spring and fall camp, is the third-team quarterback.

“We’re very confident with him in practice,” Pittman said of Fortin. “He’s done really well in the two-minute situations. He’s a good quarterback, and he has experience. We also believe in Malik, so if anything happened there, we still think we have two really good quarterbacks. They’re certainly different.

“Even though Cade can run a little bit, as well, he would probably be looked at more as the passer and Malik as the runner, but that’s really not true. They both can do either.”

Asked to assess Hornsby’s role with the Razorbacks moving forward, Pittman said the plan is for him to play quarterback. According to Pro Football Focus, Hornsby has played 26 offensive snaps this season, including 11 as a perimeter receiver, 8 in the slot and 5 in the backfield.

He has played one snap at quarterback. As a receiver, Hornsby has two receptions for eight yards.

“He’s a quarterback,” Pittman said, and added, "Certainly the plan for him to play wide receiver has not been even what I thought it would be.”

Pittman said he visited with Hornsby on Monday prior to his noon news conference.