Through 2 games, Razorbacks have passed their tests 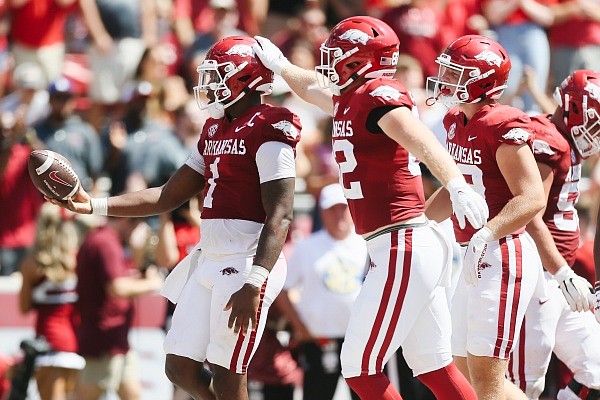 Last season it took four games for the Arkansas Razorbacks to crack the top 10 in The Associated Press poll. This year, just two.

That is a strong tribute to Sam Pittman and his coaching staff.

After wins over Rice and Texas last season, the Razorbacks were voted No. 20. A win over Georgia Southern moved them to No. 16, then they faced No. 7 Texas A&M.

This is not the first season the Aggies have been overrated.

A 52-51 loss to Ole Miss — yes, the Razorbacks were two points away from a 10-win season in Pittman’s second year — they dropped to No. 17 and then out of the poll after a home loss to Auburn.

Wins over Arkansas-Pine Bluff, Mississippi State and LSU got them back in at No. 21 and they dropped to No. 25 after a loss to Alabama. Arkansas finished at No. 22 after beating Penn State in the Outback Bowl.

Of the Razorbacks' four losses last season, two were against teams that played for the national championship. Now they have jumped from No. 19 to No. 10 in two weeks.

Arkansas has established itself as a running team that defenses almost have to sell out to stop. But if they pull out all the stops, watch out for quarterback KJ Jefferson.

The Razorbacks have rushed for 529 yards in their two wins. Raheim "Rocket" Sanders has rushed for 273 yards — it would have been much more if not for a facemask call against the Razorbacks — and Jefferson 129 yards to lead the way.

Jefferson has not had to throw much, and definitely not deep, but he has completed 36 of 47 attempts without an interception. He has 385 yards in the air and four touchdowns.

While he improved almost every game last season, his first as a starter, he appears to have made even greater strides between seasons. He is poised, confident and has become the leader of the offense.

The offense answers every threat, and through eight quarters the Razorbacks have never trailed and have outscored their opponents in five quarters.

Aside from penalties, which are an issue, the third quarter might be a little troublesome for Pittman and his staff. Obviously, Cincinnati and South Carolina made halftime adjustments to their attacks.

The Bearcats outscored the Razorbacks 17-10 in the third quarter and the Gamecocks 7-0. Arkansas’ defense did recover in both cases.

The penalties, though, are piling up with 7 for 63 yards in the opener and 10 for 122 yards last Saturday. The Gamecocks got five of their 22 first downs by penalty.

Basically, that is the biggest area of concern. Last season, Arkansas had 13 penalties in its first game but cut it to four against the Longhorns.

Mostly, the Razorbacks have won the battle in the trenches so far.

The two biggest fundamentals in football are blocking and tackling, and Arkansas has 904 yards of offense in two games, an average of 30 more yards per game over last season – and against better competition.

Being No. 10 in the nation is heady stuff, but the Razorbacks and their fans have earned it. Considering where the program was the two seasons before Pittman was hired, it is almost mind boggling to see this type of complete turnaround.

Being No. 10 brings with it a target on your back.

Bobby Petrino and Missouri State may throw everything but the down markers Saturday night. One thing is certain, Pittman has taken 25 games one at a time.