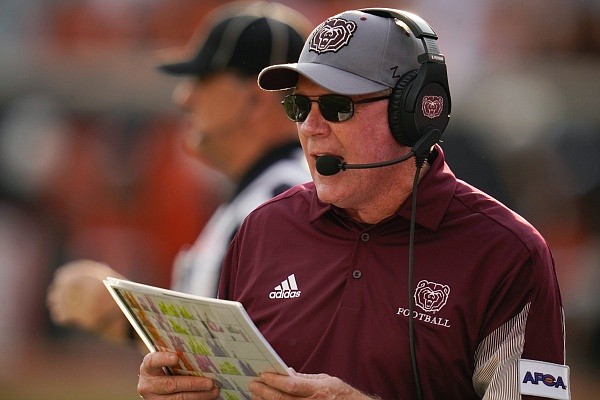 SPRINGFIELD, Mo. — It is game week, so Missouri State Coach Bobby Petrino wasn’t prepared to let his mind wander back a dozen years to a different time.

Petrino kept his news conference answers Monday regarding the brief golden era he created at the University of Arkansas to a minimum.

In 2010, Petrino led the Razorbacks to a watershed moment in their football history. Arkansas made its first and only appearance in the Bowl Championship Series lineup in his third year at the helm, an appearance in the Sugar Bowl against Ohio State, which was later forced to vacate a 31-26 win for using ineligible players.

The following season, Arkansas was back for more, achieving a No. 3 BCS ranking heading into Thanksgiving and beating Kansas State in the Cotton Bowl to cap an 11-2 run and a No. 5 final ranking. It was the first 11-win season for the Razorbacks since 1977 and just the third in school history.

Petrino, who was fired on April 10, 2012, after a motorcycle wreck with his mistress aboard, will make his long-awaited return to Reynolds Razorback Stadium in Fayetteville on Saturday.

There, his 2-0 Bears, ranked No. 5 in the NCAA Football Championship Subdivision, will take on his former team, led by third-year Coach Sam Pittman. The Razorbacks are also 2-0 and ranked No. 10 in The Associated Press poll after wins over then-No. 23 Cincinnati and South Carolina.

Following his weekly news conference Monday at Robert W. Plaster Stadium, in which he didn’t talk much about his 34-17 record in a four-year stint in Fayetteville and building the Hogs into a national power, he spoke about it.

More from WholeHogSports: After a 'rocky' start at Arkansas, Brini settled in with the Razorbacks

“I’m proud of it,” he told the Arkansas Democrat-Gazette. “I’m proud of the players, you know, and those guys I still talk to every now and then.

“I see them at different things. [Ryan] Mallett, Joe Adams, DeAnthony Curtis. A lot of them are in coaching now. I went down and spoke in Hot Springs last year and I ran into a bunch of guys down there, so that was fun.”

Petrino was asked about Arkansas football struggling for the next decade after his departure.

“Well, they’re back now,” he said. “They look really good. I’m really happy for Sam. I think he’s done a great job of building that program.

“I’m happy for the state of Arkansas. They treated me great when I was there. It’s great to see them all back and behind the Hogs. That’s the one thing that I’m really excited about is it helps the state so much.”

Earlier, he was asked about the emotions he’ll feel in returning to Razorback Stadium.

“I think we’ll see when I get there,” he said. “I’m just going to focus on the week and the preparation. I’m sure there will be some emotions.”

Pittman said Monday he and his staff draw on Petrino’s achievements, like a 21-5 record and consecutive top-10 final rankings in 2010-11.

“Last time Arkansas was relevant relevant was when Coach Petrino was here,” Pittman said. “We’re very grateful for his time here and what he did for the program.

“We’ve used that in recruiting. Without him and his staff, we wouldn’t have been able to do that. So it’ll be exciting for him, I’m sure, to come back here. But they’ve got a good team.”

More from WholeHogSports: Kickoff set for Razorbacks' game vs. Texas A&M in Arlington

A big topic of conversation for both coaches was Missouri State’s 23-16 loss at No. 22 Oklahoma State last season. The Bears recovered a Cowboys’ fumbled kickoff at the Oklahoma State 15 after Missouri State had pulled within seven points with 3:06 remaining. Petrino has said he would’ve gone for a two-point conversion if the Bears had scored, but they didn’t get that chance after a 1-yard gain, a penalty and three straight incomplete passes.

Still, the FCS school put a big scare into a team that wound up No. 7 in the final College Football Playoff rankings after falling 21-16 to Baylor in the Big 12 Championship Game.

“Last year we focused on being prepared mentally,” Petrino said of the road matchup against a highly regarded FBS team. “Making sure we were sound. We didn’t give free yardage. We were sound in our protection schemes.

“We tried to get into the fourth quarter with an opportunity to win the game. This is a good football team we’re playing. … It’ll be a great atmosphere. Big stadium and the place will be loud.”

In year’s past, the Razorbacks might have seen the lone game on their schedule against an FCS opponent as a light day at the office.

This week, they can’t afford that kind of thinking with a confident, veteran-laden team featuring a dangerous Petrino offense.

“They have a good team and went to the [FCS] playoffs last year,” Pittman said. “Almost beat Oklahoma State last year at the beginning of the year, and Oklahoma State beat Notre Dame in the Fiesta Bowl. So we know we have to be ready for a fine team coming in here.”

Petrino has led the Bears to a 15-9 record and into the FCS playoffs in both of his seasons after Missouri State struggled for decades. The Bears earned a share of the Missouri Valley Conference title in his first season in 2020-21, their first since 1990, and their playoff berth was the program’s first in 30 years.

More from WholeHogSports: Observations from Arkansas' football practice on Monday

“Well, he’s a great coach,” Pittman said. “They tried several different people before him, and he’s been able to go in there and get them back to the playoffs. He’s just a really good coach. Got a good staff.

“Went in the transfer portal and got a lot of players there, and I’m sure they went there because of his reputation as a coach. So it’s been a great job that he’s done there and I’m sure will continue to do.

Missouri State quarterback Jason Shelley won Missouri Valley offensive player of the year and newcomer of the year honors as one of a dozen all-conference selections for the Bears in 2021.

Shelley is a preseason FCS All-American who is on the watch list for the Walter Payton Award, the FCS offensive player of the year award. He is 37-of-54 passing for 563 yards, with 6 touchdowns and no interceptions, and he’s run for 36 yards and a score.

Petrino has settled in nicely in southwestern Missouri, populating his staff with familiar faces while surrounded by family. His son Nick Petrino is the Bears’ offensive coordinator. His son-in-laws Ryan Beard and L.D. Scott are defensive coordinator and defensive line coaches, respectively. Reggie Johnson, a Louisville graduate and former Arkansas assistant under Petrino, is the inside linebackers coach.

“I’m doing great,” Petrino told the Arkansas Democrat-Gazette. “I’m having as much fun as I’ve ever had coaching. I’ve got eight grandkids that are around me all the time. So I’m big smiling and enjoying life.”