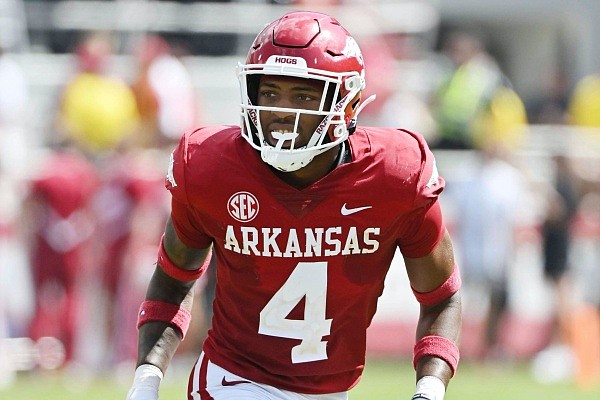 In third-year coach Sam Pittman’s mind, that should likely be the norm in the coming weeks as the 10-ranked Razorbacks reassess their secondary ahead of the Southwest Classic showdown against No. 23 Texas A&M in Arlington, Texas, this weekend.

“I think Malik Chavis is a guy we need on the field,” Pittman said Monday previewing Arkansas’ fourth game week. “When he's not playing corner, we need him at safety. And I’m not sure if we don't need him at safety and just put (Hudson Clark) at corner.

“We're going to experiment a little this week and see if we can't get the right people in the right spots. We've got to get our best five guys out there on the field at all times.”

Chavis recorded one tackle during Arkansas’ 38-27 victory last week, but his starting nod and playing time show an apparent trust from the defensive coaching staff in the Rison native. The one stop stemmed from a lack of opportunity.

During a game in which Missouri State passed for 357 yards and recorded 10 throws of at least 16 yards, Chavis performed admirably. According to PFF, he allowed 1 catch for 13 yards on 4 targets.

The completion against Chavis came on the Bears’ opening series.

“I don’t know exactly, but we’re certainly going to look at it.”

PFF analytics currently have Chavis with a coverage grade of 60.7 and 78 of his snaps coming at cornerback. He also has 10 reps at free safety.

Chavis was a piece of the secondary who in the preseason received praise from defensive coordinator Barry Odom and Dominique Bowman, who is in his first season coaching cornerbacks after arriving from Marshall. Odom noted that Chavis was capable of fairly seamlessly playing multiple spots.

Chavis (6-2, 192 pounds), moved to corner during the spring. In his short time with Chavis, Bowman has seen great potential.

More from WholeHogSports: Arkansas-Alabama gets featured slot for Oct. 1 meeting in Fayetteville

“Every single opportunity that he gets to play corner, he gets better, so every single day he lines up at corner, he's just better,” Bowman said. “I think he's a pro if he buys in to the technique and the fundamentals and gets it from the neck up.

Coming from a small high school in South Arkansas, Chavis admitted that he wasn’t entirely up to speed on all that is required to play defensive back at the college level early in his Razorbacks career. Supreme athleticism carried him through his prep years.

Should he play a high volume of snaps this weekend against the Aggies, he will be tasked with helping Arkansas slow a Texas A&M passing game that has scuffled (57.5% completions, 118.5 yards per game) in a 1-1 stretch against Appalachian State and Miami.

“At safety, you’ve just got to look a lot more for the whole field, and then for corner, it’s just you’ve got to focus more on that one guy,” Chavis said. “Like, if I mess up, you know, just bite on the wrong thing, I have a lot of catch-up speed.

“It’s really just the whole nine yards, putting it together, and just going out there on the field and executing.”