Hogs could really use some home cooking 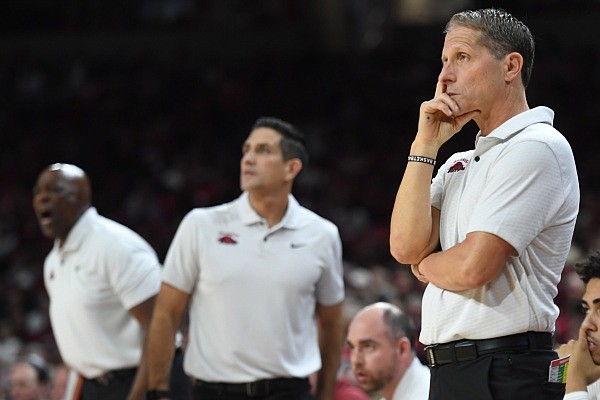 Arkansas coach Eric Musselman (right) watches Wednesday, Jan. 4, 2023, during the first half of play against Missouri in Bud Walton Arena in Fayetteville. Visit nwaonline.com/photo for the photo gallery.

The round-robin conference basketball settling “I win at my place and you win at yours.”

Obviously the late coach of Arkansas (1974-85) fared far better than “Brother-In-Law” for his five-teams Hall of Fame career.

But Wednesday night, Musselman gladly would toast a round of Brother-In-Law ball. His 12-3 overall Razorbacks come home to Bud Walton Arena 1-2 in the SEC. A Jan. 4 victory over Missouri in Fayetteville is sandwiched by road losses at LSU and Auburn.

Broadcaster Chuck Barrett in the radio postgame wake of the 72-59 loss last Saturday night in Auburn, Ala., tried cheering up Musselman. Barrett reminded that the Razorbacks return home Wednesday.

“Yeah, but against a probably top-5 team in the country,” Musselman replied.

The 13-2 Alabama Crimson Tide, then-No. 7 in the AP poll, indeed elevated Monday to No. 4 and rolls 3-0 in the SEC into Fayetteville. Alabama won at then-No. 21 Mississippi State plus Tuscaloosa, Ala., triumphs over Ole Miss and last Saturday clobbering Kentucky 78-52.

“A team that’s really playing well,” Musselman said. “We’ve got to start the game better than we have the whole season.”

Monday’s AP No. 15 Razorbacks, 12-3 overall, actually sported strong stats even while wire-to-wire pasted on The Plains. They outrebounded Auburn 45-32, including 17 offensive boards, and took 32 trips to the free throw line to Auburn’s 22.

Meanwhile, of Arkansas three-point shots, only 2 of 16 found a home on the range.

More from WholeHogSports: Razorbacks slide to No. 15 in latest AP poll

Defensively, the Razorbacks were outscored 25-6 off turnovers while committing 14 miscues to Auburn’s 8.

The youthful Hogs have struggled through some tough spots at Bud Walton like trailing Mizzou 25-8, but always responded to their rallying fans. Not so on their own in two hostile SEC environments.

“Certainly right now this is a ball club that’s struggling on the road,” Musselman said. “And we’re young. That’s plain and simple. You take two talented players off any team in the league like we have that are out with injuries and you are probably going to struggle offensively.”

Major setbacks, but the games must go on. They’ll try to revive road shows Saturday at Vanderbilt and Jan. 4 at Missouri.

Meanwhile Musselman needs a brother-in-law to stem the visiting Tide.