Johnson not shy about hitting the glass 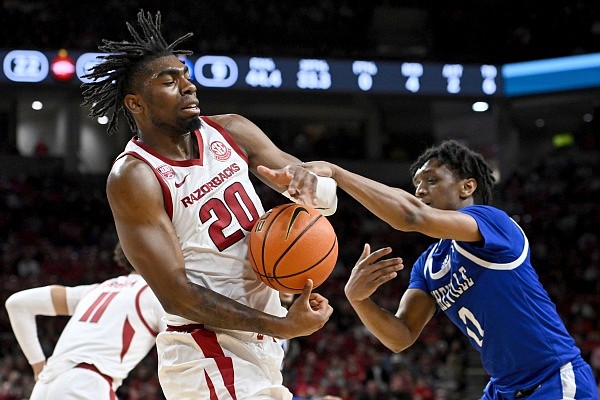 FAYETTEVILLE — In two seasons at the University of Arkansas, forward Kamani Johnson has as many offensive rebounds as defensive with 58 on both ends of the court.

The 6-7 senior has 24 offensive and 23 defensive rebounds in 181 minutes this season while playing off the bench in 12 of 13 games.

“That’s kind of my thing,” Johnson said. “I like to go get them O boards.

Johnson’s biggest offensive rebound came in Hawaii when the Razorbacks beat San Diego State 78-74 in overtime at the Maui Invitational. He tied the game 67-67 on a tip in as time expired in regulation.

“Kamani just has a great knack to offensive rebound,” Razorbacks Coach Eric Musselman said. “He follows the trajectory of the ball on shots.

“Really good players just have a certain gift that separates them. Certainly with Kamani, offensive rebounding is an area he really excels at. And he takes great pride in it as well.”

Last week, Johnson had a season-high eight rebounds in 20 minutes in Arkansas’ 74-68 victory over Missouri and five in 20 minutes at Auburn, where the Tigers beat the Razorbacks 72-59. Eight of his rebounds were on offense.

“It takes heart, it takes grit,” Johnson said of the mentality to rebound. “You’ve got to want to do it for sure.

“Not a lot of people want to do it. A lot of people focus on other parts of the game, and I’ve always tended to watch the Kevin Garnetts and the Dennis Rodmans growing up.

“I tend to focus on the high-energy players. That’s who I tend to model my game after.”

Johnson isn’t the only Razorback who has been hitting the boards hard.

Going into No. 15 Arkansas’ game against No. 4 Alabama at 6 p.m. Wednesday in Walton Arena, the Razorbacks have a plus-5.6 rebounding margin.

In three SEC games, Arkansas is averaging 15.0 offensive rebounds to tie No. 6 Tennessee for first in the conference.

“It’s been an area of emphasis,” Johnson said. “But also when you’re missing a lot of shots, you tend to get a lot of offensive rebounds.

“So hopefully we don’t rank that high anymore, and hopefully we’ll start knocking down some shots. But if not, we’re definitely going to clean up the O boards for sure.”

Arkansas is shooting 39.4% (69 of 175) in SEC games, so there have been plenty of offensive rebounding opportunities.

But it’s more than the volume that has been impressive about the Razorbacks’ rebounding.

In SEC games, Arkansas has rebounded 39.5% of its missed shots and 77.1% of its opponents’ misses to rank second in both categories behind Tennessee, which is at 45% and 77.8%.

Auburn came into its game against Arkansas at plus-5.7 rebounds led by 6-10 Johni Broome, 6-8 Jaylin Williams and 6-11 Dylan Cardwell.

“All those guys get off the ground,” Musselman said. “So we’re going to have to rebound certainly on Wednesday at six o’clock against a really, really good, aggressive rebounding team in Alabama.”

Miller and Clowney are each averaging 8.5 rebounds. Of Miller’s 127 rebounds, 33 are on offense.

“Miller does a phenomenal job getting his own rebound, old-school, follow your shot,” Musselman said.

Arkansas has continued to rebound well despite losing 6-10 sophomore Trevon Brazile — whose 6.0 average remains the team’s best — to a season-ending knee injury in the ninth game against North Carolina-Greensboro.

More from WholeHogSports: Arkansas slides to No. 15 in latest AP poll

Walsh had 10 rebounds at Auburn to raise his average in SEC games to 8.7.

Mitchell also is averaging 8.7 rebounds in SEC games with Black at 5.7, 6-6 junior guard Ricky Council at 5.0 and Davis and Johnson each at 4.3. Jalen Graham, a 6-9 senior, had six rebounds at Auburn.

“I think our front court has done a great job during SEC [play] of holding other front courts below their averages in points and rebounds,” Johnson said. “So I think [Alabama] is just another matchup that the front court is going to take pretty personal, because I feel like not a lot of people are talking about us as much as the other front courts in the SEC coming in.

“They have a lot of great bigs. It’s going to be a fun matchup. We’ll see.”

“Certainly against the team we have coming in here Wednesday, we’ve got to not just defend individually, but defend the three-point line,” Musselman said. “And then the only way to end a defensive possession is with a defensive rebound.”