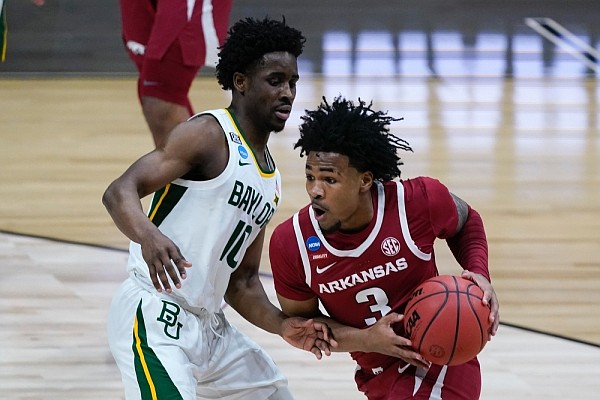 The eighth in a nine-part series reviewing Arkansas basketball in 2020-21.

Note: Desi Sills publicly stated he was entering the NCAA transfer portal on March 31. He is expected to announce his transfer destination soon.

• Showed a well-rounded game in November and December. Desi Sills entered the 2020-21 season as a preseason second team All-SEC selection by the league’s coaches, and early on he looked the part. He was averaging better than 14 points and shooting 41.7% from three-point range through nine games. Sills was also continuing what we had seen from him as a sophomore: fearlessness attacking the rim and finishing at a solid clip. In that same span, he was second on the team in scores at the rim with 29, trailing only Justin Smith, who had 36.

Sills was every bit the leader and player many thought he could be after a rigorous offseason of training and betting on himself. He even recorded a 16-point, 10-rebound double-double against Oral Roberts in which he grabbed a career-high four offensive rebounds. He also had 19 assists in December and blocked four shots in a five-game stretch. Sills later capped the 2020 calendar year with the best performance of his career, pouring in 23 points at Auburn in an Arkansas win.

It appeared Sills was entering the first full month of SEC play with an abundance of confidence and a role that was secure. But things began to unravel from there.

• Made non-scoring contributions in the NCAA Tournament. Sills’ role by the end of the season was clearly not what he had hoped for when it began, but Arkansas and Eric Musselman did count on him in the final two games of the season vs. Oral Roberts and Baylor. He played a combined 59 minutes in those games after seeing the floor for 16 against Colgate and Texas Tech. Sills delivered some under-the-radar performances in the Sweet 16 and Elite Eight despite scoring four total points, finishing with six rebounds and four assists in each outing. He also added three steals, two against the Golden Eagles.

Sills was no longer a primary scoring option because of the emergence of Davonte Davis, Justin Smith’s efficient play in the lane and the offensive abilities of Jalen Tate and Moses Moody, so he quietly pitched in in various ways. JD Notae’s streaky scoring also played a role. In the final two games of the season, Arkansas’ defense held Oral Roberts and Baylor to 0.96 points per possession in Sills’ 74 possessions, according to HoopLens analytics. It gave up 1.11 PPP in the 72 that he sat. The offense scored 1.04 PPP when he was in the lineup and 0.94 when he wasn’t.

• Solid steals numbers. When Sills was engaged on the defensive end, he could give opposing guards fits. In December, he tallied 10-plus steals in a month for the first time in his career, finishing with 13 in December. In the first 18 games of the season, Sills recorded at least one steal 15 times, and he had a season-high four vs. UT-Arlington. In three other games in that span he came away with three steals.

For the season, he finished with a steal rate of 2.6%, according to KenPom data, which ranked 310th nationally. It was the best mark of his Arkansas career. Davis’ was also 2.6%, and Notae’s figure of 3.4% led the team and was 82nd in the country.

• Inconsistent from 3. Sills could certainly be classified as a streaky perimeter shooter in his first two years at Arkansas, and that remained true last season. He knocked down 15 three-pointers in November and December then made 12 over his final 23 games, and five came in one game — at South Carolina on March 2. Sills shot 21.7% from deep in January on 23 attempts, 14.3% in February on seven attempts as he battled a shoulder injury, and 6 of 19 in March. Outside of his 15-point game vs. the Gamecocks, he was 1 of 12 from three-point range in seven other games in March.

• Struggled finishing at the rim. In 2019-20, Sills finished third on the team in scores at the rim with 60 on 100 attempts, trailing Mason Jones and Jimmy Whitt. Getting 60% of your attempts in the lower half of the lane to drop is pretty good for a smaller guard.

Last season, he was 53 of 102 (52%) at the rim, finishing below 50% of his attempts in the final three months of the season. January was a struggle, and he saw only 18 of 40 shots at the rim fall. The following month, Sills attempted only 10 shots at the rim, partly due to his injury, making four. He was 2 of 7 in March, and one bucket was a breakaway dunk vs. Baylor.

Several times in the NCAA Tournament it appeared Sills, who I thought was a solid cutter off the ball, had clear paths to the rim for layups, but they missed the mark. I don’t know this for certain, but the hard fall he took in the Mississippi State game at home to begin February could have lingered in his mind the rest of the season – either that or he did not want to risk re-aggravating the injury by taking another big hit. He did not attack the lane and opposing bigs with the same fearlessness as he did before that night. Sills did not attempt a shot in the lane in six of the last 13 games.

Best Sills quote: “You see my face. I can’t stop smiling because it’s a wonderful feeling. It’s my first experience for three years. I’m happy to be here, and I’m happy to put on for Arkansas.” — Sills during an interview on Selection Sunday

Best quote on Sills: "Desi's the Auburn killer. The War Eagle slayer.” — Jalen Tate after Sills’ second 20-plus point game vs. the Tigers in January