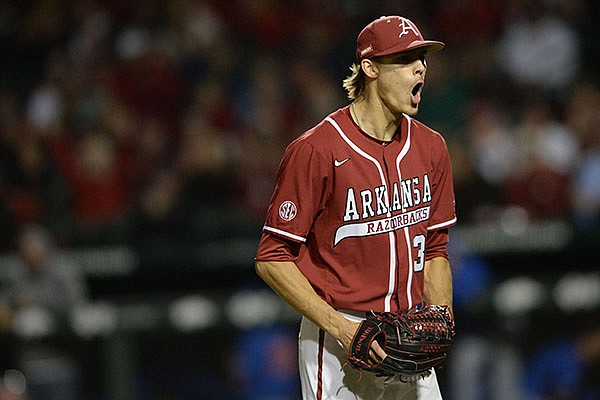 Arkansas reliever Caden Monke celebrates Friday, May 21, 2021, after recording the final out of the top of the eighth inning of play against Florida at Baum-Walker Stadium in Fayetteville.

FAYETTEVILLE — Six players with Arkansas ties were selected Tuesday on the final day of the MLB Draft.

Arkansas left-handed relief pitcher Caden Monke was drafted by the Kansas City Royals just moments after the Pittsburgh Pirates selected Braylon Bishop, a high school outfielder from Texarkana who signed to play for the Razorbacks.

Bishop was the 403rd overall selection in the draft. Monke was drafted 409th.

Bishop and Varnado said Tuesday they plan to play for the Razorbacks in 2022. In an interview with WholeHogSports.com, Bishop said he hoped to replace Christian Franklin as Arkansas' center fielder.

“I will for sure be at Arkansas and my goal is to just go up there and try to take over where Franklin has left off,” said Bishop, who was ranked the 88th-best prospect in the draft by Baseball America. “I think that is what I will do and I am excited.”

The two-sport star at Arkansas High School was once considered a potential first-round prospect, but his stock fell gradually over the past year due to concerns over his ability to hit for average. Bishop, who has been clocked at 6.6 seconds in the 60-yard dash, is considered a strong base runner and good fielder.

Earlier Tuesday, Varnado tweeted he plans to play for the Razorbacks. Varnado, who played high school baseball at IMG Academy in Florida and was rated the 196th-best player in the draft, moved to Fayetteville last month and is enrolled in summer classes.

“I would like to thank all the clubs that showed interest in me over the past couple days," Varnado tweeted prior to the Diamondbacks' selection of him. "I’ve already made it home on the Hill and excited for the years to come. Razorback nation let’s do it!”

The Razorbacks also received word from shortstop Jalen Battles that he planned to return next season. Battles, who was ranked 359th in the draft by Baseball America, turned down interest in the third and fourth rounds, his father said in an interview with WholeHogSports.com.

Arkansas had nine players and six signees selected during the 20-round draft. It is not known how many of the players with ties to the Razorbacks will turn pro.

Monke, Welch and Trest all have remaining eligibility at Arkansas.

Monke was one of the Razorbacks’ top relievers during its SEC championship run this year. The Mt. Olive, Ill., native pitched 34 innings in 27 appearances, and went 5-1 with a 3.71 ERA.

Welch was a pinch-hit specialist in his first season after transferring from junior college. He had a team-high .388 batting average and 1.315 OPS, and had two of Arkansas' most memorable hits — a game-winning single to beat Florida on May 21 that clinched the SEC regular-season championship, and a three-run home run during the eighth inning of a 6-2 win over Nebraska in an NCAA regional championship game.

Dixon, who began his college career at Texas in 2020, had a .335 batting average with 10 home runs and 39 RBI during his only season at Weatherford.