Hogs get money's worth against Texas State 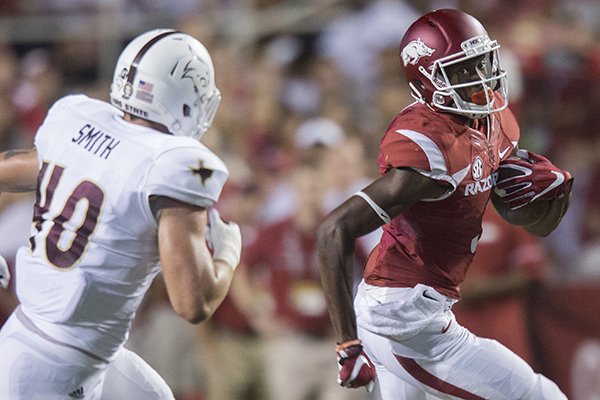 Arkansas receiver Dominique Reed runs during a game against Texas State on Saturday, Sept. 17, 2016, in Fayetteville.

FAYETTEVILLE -- On a day when Alabama was all out to survive Ole Miss and end that losing streak at two and Louisville stomped the Seminole out of Florida State, the Arkansas Razorbacks enjoyed the next best thing to an open date.

There were a million reasons Texas State agreed to this play date, all of them dollars.

All Group of 5 schools play these games, they have to, and the Bobcats earned every penny as they went the distance despite getting knocked down and almost out on every possession.

By halftime the underdogs -- sorry coach Everett Withers that's what you were and why the final period was cut to 10 minutes -- had one first down, and that came on the opening drive.

The only time Texas State visited Arkansas territory was when it recovered an Austin Allen fumble at the Razorbacks 42.

At halftime, when the Hogs led 35-0, Texas State had 26 yards of total offense on 24 plays. Admittedly, the Bobcats ran their uptempo offense fast, and that explains why their punter might have a sore leg today.

On the flip side, Arkansas' offense had 350 yards at the half and had run 43 plays.

Allen lost the handle once, but he was 12 of 16 passing for 203 yards and 2 touchdowns and was sporting an incredible 222.6 rating.

And there was still a second half to be played, or endured if you are a program trying to establish itself as something other than an also-ran in the Sun Belt Conference.

Arkansas came into the game with 24-1 record against Sun Belt teams, and that one loss was to Louisiana-Monroe during John L. Smith's interim season as the Hogs head coach.

Besides, Bret Bielema called off the dogs in the second half -- the Razorbacks ended up winning 42-3.

There wasn't much the Hogs could learn against Texas State, although right guard Jake Raulerson and center Frank Ragnow traded positions, plus Brian Wallace got some playing time at right tackle, where the Hogs need some depth.

Rawleigh Williams ran like he's never had a pain, let alone a broken neck, and at the half the sophomore had 79 yards on 12 carries and a touchdown.

OK, one thing that stood out was that true freshman running back Devwah Whaley is a 4-F player -- a fighter, fast, fluid and furious.

His first five carries netted 21 yards, but it seemed like he was always one defender away from taking it to the end zone.

The Razorbacks are halfway to being bowl eligible at the one-quarter mark of the season. They didn't reach that status last season until Oct. 24 when they beat Auburn and stood 3-4 overall.

The Hogs are 2-0 against Texas teams and have the Texas A&M Aggies this Saturday at AT&T Stadium, an opponent that has been very lucky to beat the Hogs the last two meetings.

If any further illustration was needed to show how one-sided the first two quarters were, it was on display when about a fourth of the crowd, which started out as an impressive one for a nonconference opponent, didn't come back after halftime.

So, they didn't see the Bobcats come out and throw under the coverage in their quick-quick offense, although Saturday night they needed to slow down and shorten the game rather than give the Razorbacks more time and more opportunities.

They got a few first downs and drove to the Arkansas 18 before a sack forced them to settle for a 39-yard field goal. Arkansas answered with an 82-yard, 15-play touchdown drive that took 8:54, and by the start of that short fourth quarter there were probably more people on Dickson Street than at the game.